Home Lifestyle Cooking to Cope: Why MP Taverna’s Michael Psilakis Is Still in the... 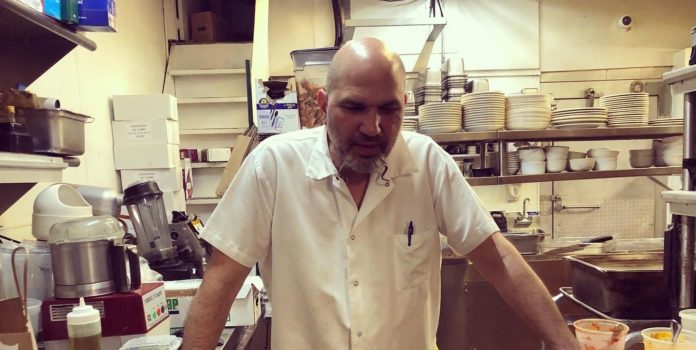 On Wednesday evening, I parked my car next to a restaurant that I have eaten at countless times. The parking lot was empty all the way to the Hudson River. The restaurant was closed.

I had ordered takeout for my wife and me: a Greek salad, some pasta with meatballs, a generous supply of tzatziki and pita. When I walked up to the front door of the restaurant, which is called MP Taverna, I saw a handwritten menu that the chef, Michael Psilakis, had taped to the glass that morning. On the menu he had listed two sets of prices: one for people who still had jobs amidst the chaos of the coronavirus crisis, the other for people who had lost them.

MP Taverna occupies a central place in my village by the river. It is where people congregate to celebrate uproarious birthdays, weddings, anniversaries. If you want, Michael can throw a feast for you and your friends—a feast involving a whole pig, a whole goat, or a whole lamb. It’s a place with that kind of spirit. It’s devoted to what all restaurants are supposed to be devoted to—community. During a gloomy time, years back, when I was going through a divorce, I spent untold hours at the MP Taverna bar, where the bartenders tried to make me feel better by turning me on to new bands and making sure my martinis were as cold as icebergs.

I know that bar well, and Michael has cooked more meals for me than has any other chef on the planet. So even though MP Taverna was closed, I pushed through the front door and walked past an open bottle of red wine next to a spray can of Lysol on the bar, through the darkened familiar dining room with chairs piled on tables, and right into the kitchen.

There I found Michael, by the stove, cooking by himself.

Now, it helps to know something about Michael Psilakis, in case you don’t. The guy has been around. He’s 50. He’s bald and solidly built, and these days he sports a twirled mustache that makes him look like an old-time circus ringmaster. He has done the whole Food Network thing. He has been on TV. He has had bestselling cookbooks like 2009’s How to Roast a Lamb: New Greek Classic Cooking. He has been nominated for James Beard awards. In 2008 he was chosen as one of Food & Wine’s Best New Chefs, and here in Esquire, in 2007, writer John Mariani named Michael Psilakis America’s Chef of the Year.

“I had a Michelin star at one point,” Michael told me. “I had eight restaurants at one point. It all pulls you away from the kitchen. I think at one point I was more of a figurehead and a spokesperson for a brand. Now I feel like a chef again. It’s where I want to be.”

If you have wondered about how celebrity chefs can operate, say, 40 restaurants when they’re hardly ever standing in the kitchen, well, what I saw on Wednesday evening at MP Taverna represented the stark opposite: Michael was the only cook in the kitchen.

Like thousands of chefs around the world, he had been forced to close his establishments—this MP Taverna in Westchester County and Kefi in Manhattan—as part of the widespread effort to slow down the surge of the virus with social distancing. On the front door at MP Taverna, Michael left an emotional note explaining what was going on. “We have been forced to close,” he wrote. “Yesterday my team spent the day cleaning, knowing all the time it would be their last day for the foreseeable future. It was amazing to me, to see them laughing, singing and even sometimes dancing while they wiped, cleaned, organized, scrubbed, and finalized the untimely closure.” Michael still couldn’t absorb the concept of leaving. “As I locked the doors and slowly walked to my car, I stopped and turned. The restaurant seemed lonely. It was dark and empty with no signs of life.”

After closing up, Michael went home, fixed himself an Old Fashioned or two, and started watching TV. He had never seen anything on Netflix before. He didn’t even know how to use it. Somewhere in the middle of the night he clicked to a Chef’s Table episode about the Italian butcher Dario Cecchini, and at some point during the viewing of that episode, Michael lost it.

See, here’s the thing about chefs, or a lot of them, as I have learned over the past decade of writing about them. They may come off as grouchy, deranged malcontents who don’t know really how to interact with polite society outside of the flame-licked, high-pressure confines of a kitchen—and there’s plenty of truth to that—but they love you. Chefs love you. They cook for you because they love cooking for people. They can’t really help it. It’s how they express their bottled-up feelings. Michael can’t help it.

He was transfixed by this episode of Chef’s Table about the Italian butcher, and it made him think about a formative moment in his own life, a moment when he watched his father, an immigrant from Greece, slaughter a lamb for an Easter Sunday feast. It made him think about his Greek heritage, and how his purpose on Earth is to honor ingredients by treating them with genuine respect and cooking them for people with genuine love. It caused him actual agony to think about wasting all that food in his fridge.

“If something’s going to lose its life, you’ve gotta respect it,” he said.

So the next day Michael came back to MP Taverna and stuck that take-out menu to the front door. He asked the mayor of my village to pass around his personal cell phone number to anyone who wanted food. That’s how you order now—you just call Michael, and he cooks the food on his own, and you pick it up by the door. He can’t afford to pay any employees. Income is negligible. On the night I came in, Michael fielded 16 orders. Even though there’s no waitstaff, customers in the village have been leaving tips as high as 30 percent—“people just want to help,” he said.

“This is not making me money, dude,” Michael went on. “We’re losing money. Financially, this is not a smart move.”

It turns out that Michael came back to cook by himself because he didn’t want to waste the ingredients, yes, and because he loves the people in the village, yes, but mostly because, as he told me, “I find a lot of peace in this. It’s helping me. It’s therapy.”

He is cooking because that’s the thing he needs to do to stay sane.

He is cooking to cope. And he is going to keep cooking until someone forces him to stop.