A large iceberg floats among sea ice floes off the coast of Greenland, as seen during an aerial survey on April 21, 2018. (Source: NASA/Linette Boisvert)

Ordinarily, I wouldn’t be buoyed by news that an expanse of Arctic sea ice the size of Arizona and Nevada has gone missing.

But given the state of the world right now, I am taking a tiny measure of solace in the latest analysis of Arctic sea ice conditions, released yesteray by the National Snow and Ice Data Center. It shows that the region’s floating lid of ice likely reached its annual maximum extent on March 5th, measuring ‘just’ eleventh lowest in the satellite record, which stretches back to 1979.

This year’s maximum extent is 228,000 square miles below the 1981 to 2010 average, according to the NSIDC’s preliminary analysis. (In the interest of full disclosure, the NSIDC is based at the University of Colorado, where I work as Director of the Center for Environmental Journalism.) 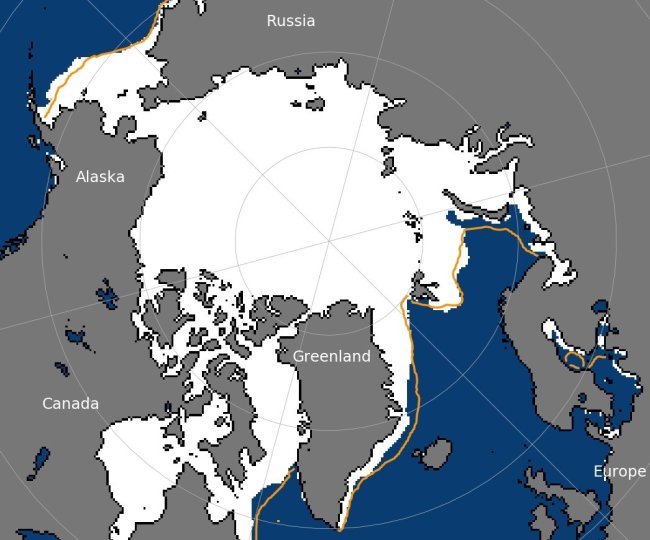 The geographic extent of sea ice in the Arctic on March 5, 2020 reached 5.81 million square miles — likely the maximum extent for the year. The orange line shows the 1981 to 2010 average extent for that day. (Source: National Snow and Ice Data Center)

With the annual maximum extent reached, Arctic sea ice is now starting to shrink as temperatures warm. This likely will culminate in September when the annual sea ice minimum usually is reached.

Lest you think that the current not-as-bad-as-it-could-have-been news portends something not so bad in September, the NSIDC offers this caution: “the specific maximum extent of sea ice in any given year does not correlate to the minimum extent.”

That’s mostly because summer weather is largely reponsible for how low the ice extent will go, culminating in the September minimum. We’ll just have to see how things go in the coming months.

One thing is certain: Despite any month-to-month ups and downs in sea ice cover relative to the average, the long-term trend for every month of the year is down, thanks to human-caused climate change.