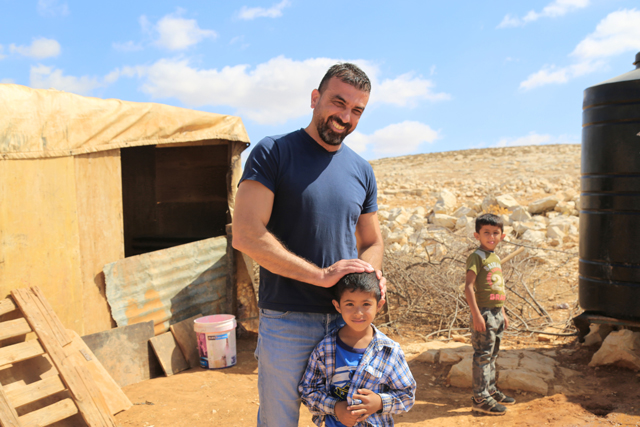 “What motivates me is the strength and resilience of these communities in challenging times, and knowing that I am using my knowledge to help them increase their productivity and income to improve their livelihoods.”

Restricted access to land, water for irrigation, agricultural services, and local and international markets for inputs and produce continue to severely impair the economy and its potential for growth, putting at risk the livelihoods of farmers and herders. In Gaza, recurrent open conflict, severe shortages of electricity and the prolonged closure regime resulted in particularly severe economic deprivation, constraining households’ income and deepening the extent of poverty suffered by families.

Amro works with communities in the West Bank and Gaza Strip, supporting the implementation of agricultural projects that seek to improve livestock productivity and sustainably strengthen the livelihoods of herding communities. This is his message on World Humanitarian Day.

“In a protracted crisis, characterized by pervasive risks, life is not easy and food insecurity is still very high with more than one quarter of the population in the West Bank and Gaza Strip characterized as food insecure. I come face to face with poverty every day,” Amro says.

“The most difficult part about my job is seeing how the living standards of the communities that I work with are negatively affected by the crisis. Most families depend on livestock rearing for a living, but productivity is lowered by restrictions on movement, which makes it difficult to access grazing land, and the unavailability of water, among other challenges,” he says.

“The most fulfilling part is seeing how the activities we have implemented are making a difference in the lives of people. In one of the communities where FAO rehabilitated a water cistern, a woman approached me recently and she could not hide her happiness. She was grateful that she could bathe her children more often – it’s the simple things that most people take for granted that mean so much to the communities that I work in,” Amro says.

“My biggest hope is that these communities, like everyone else, can have access to income opportunities, housing, education and better living standards.”

Communities in the West Bank and Gaza Strip are #NotATarget.