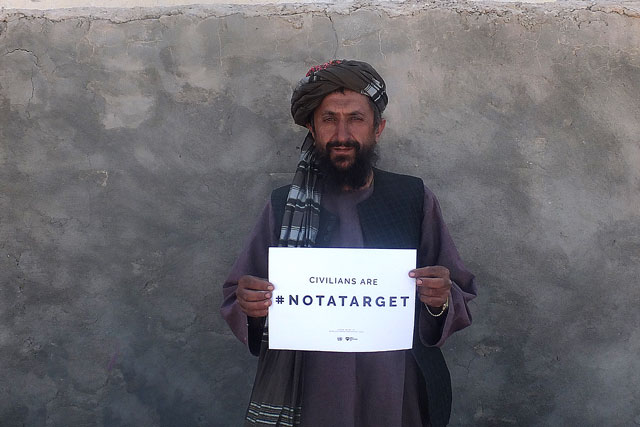 Afghanistan is experiencing one of the world’s most complex humanitarian emergencies. Ongoing conflict, natural disasters, internal displacement and cross-border movements continue to increase food insecurity. This year, farmers are also suffering from a drought that is affecting the majority of the country.

Ahmadullah lives in Burj, a village in Zairy District, Kandahar. Like many Afghans, he is a smallholder farmer who owns livestock and grows fruit on his small plot of land. Drought has caused his gardens to dry out and many of his crops to fail. His animals are not breeding, and he has had to sell many of them. All his neighbours are in the same boat. They cannot afford to buy livestock feed due to drought-induced price increases, so their only viable option is selling meat at low prices.

Ahmadullah and his neighbours received animal feed as part of a FAO drought-mitigation project in Kandahar, one of the most drought-stricken provinces in the country.

Many farmers are coping with the drought by digging deeper tube wells to source both drinking and irrigation water. However, this is not a sustainable strategy. Deeper wells just mean that groundwater is becoming depleted faster. Such short-term coping techniques, coupled with the near-yearly droughts of the past two decades, mean that underground aquifers are emptier than ever before. Farmers know this strategy is not going to keep working in the long run. They know less rain is falling, they see river flows decrease, and they watch mountain snow cover shrink with each passing year.

Accessing food and water has always been a struggle for Ahmadullah’s family. “Since the time the Taliban were ruling, I’ve often had to borrow money from relatives and friends in order to get enough to eat,” he said. “I’m worried we will have to do the same this year, or worse – we could have to move. But, with so many provinces suffering from drought, I don’t know where we’d go.”

With droughts happening so frequently, farmers barely have time to recover before the next one hits. High temperatures this year in parts of the country have also made the current drought particularly punishing. Decades of war have destroyed much of Afghanistan’s irrigation infrastructure. Without timely rebuilding of proper irrigation systems, many farmers fear they will not be able to go back to farming and ultimately lose their main source of livelihood.