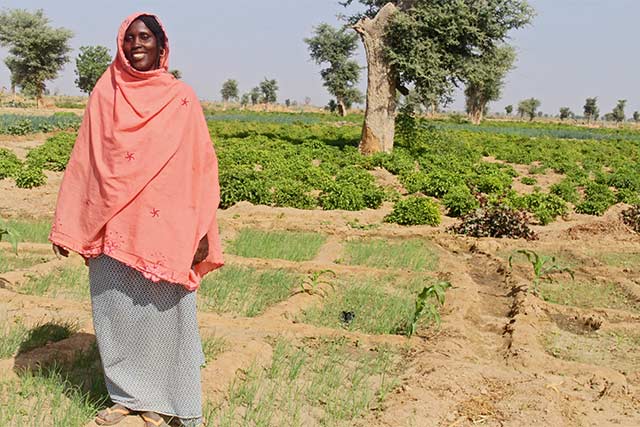 Aisa ya Maida, who lost her husband during an attack on her home in Magumeri, a Local Government Authority (LGA) in Borno State, fled to Mashumari village in Konduga (a neighbouring LGA) with her seven children where she resettled in an informal camp. With no income and few belongings she struggled to meet her family’s needs and had to rely on food assistance for survival. Once the security situation in Konduga had improved, she was eager to start farming to improve her difficult situation.

About 1.8 million people, mainly from rural areas, have been displaced by Boko Haram-related violence in northeastern Nigeria (International Organization for Migration, Displacement Tracking Matrix, February 2018) and the impact on the food security and nutrition situation has been devastating.

In 2017, a large-scale humanitarian response, led by the Government of Nigeria and humanitarian partners, including United Nations agencies, NGOs and local stakeholders was launched to contain severe hunger. FAO contributed to this response by supporting 138 801 households to restore their agricultural livelihoods. However, while much has improved, by October-December 2017, some 2.6 million people in the three northeastern states of Adamawa, Borno and Yobe were facing severe hunger.
Working closely with the Government of Nigeria, in October 2017, FAO launched a campaign to help 117 000 farming families (about 820 000 people) to grow rice and vegetables during the off-season (October 2017–April 2018).

Thanks to funding from the Governments of Belgium, France, Germany, Norway and the United States of America, and the Directorate-General for European Civil Protection and Humanitarian Aid Operations, families like Aisa ya Maida’s are receiving fertilizers, and vegetable and rice seeds to resume food production and enhance their livelihoods.

In November 2017, Aisa ya Maida received vegetable seeds (amaranth, cabbage, carrot, okra, onion and tomato) along with a 25-kg bag of fertilizer. Community members also helped her by lending her agricultural tools and she was able to secure farmland thanks to a sharecropping arrangement that was negotiated through the Bullama (community leader).

In the past, she would only help her husband with harvesting as the majority of her time was dedicated to taking care of their children and their home. Although she had experience in planting cowpea, which are often inter-cropped with staples such as guinea corn or maize, she had to adapt to her new situation and learn how to carry out other agricultural activities as well.

Her eagerness to learn has made her a model farmer within the community. Under the FAO programme, Aisa ya Maida also received support from the Borno State Agricultural Development Programme extension staff who selected her as a lead farmer for women engaged in farming in the area. With a flourishing farm, many women in the village approached her to show them how to carry out basic activities such as preparing vegetable seedling beds, transplanting them into the main farm and tending to different crops.

“In our community, (Magumeri, Konduga, Borno State) we did not know that we were sitting on water (i.e. aquifers), when I started irrigated farming many other women admired my farm and wanted to join me. I encouraged them to form a group for themselves guiding them on farming activities,” she said proudly. She now supports 30 other women in the development of their farms.

Many of the women she farms with are in a similar situation and they have created a support network to help each other cope in a situation of distress. By setting up groups they can show each other how to plant vegetables, help each other to till the land and jointly agree what to plant and how to share their harvest. “As a group, the whole family farms and to discourage group members from selling the seeds received, if they participate and help with harvesting they can each take a half bag of the harvested vegetables and receive NGN 100.00‒200.00”. This helps group members to support each other and increases social cohesion.

A new paradigm for boosting the impact of humanitarian responses to...