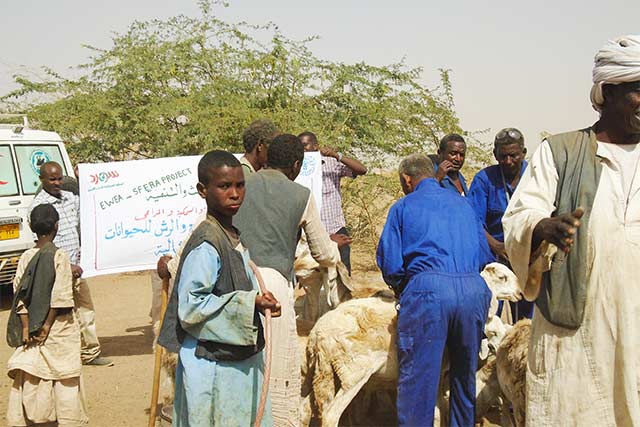 The Sudan is one of the driest countries in Africa, where 70 percent of the rural population relies on subsistence agriculture for their livelihoods, and rainfall can determine whether or not farmers will harvest crops.

The Early Warning‒Early Action (EWEA) system for the Sudan was designed to monitor the risk of drought and dry spells in both the Kassala and North Darfur states. Aiming at strengthening the early warning mechanism for drought at national level, the EWEA system draws upon a range of climate, seasonality and vulnerability data.

In countries where early warning data is scarce, the success of EWEA systems relies on partnerships with local and state agencies in order to fill knowledge gaps and build a holistic understanding of the situation. FAO established critical links with state agencies such as the Food Security Technical Secretariat in Kassala who provided vital information on local livestock conditions, livestock movement, animal and plant diseases and water availability. This helps to understand the situation, and compare past and present local market prices and rainfall forecasts in order to pick up on unusual patterns and increasing vulnerability.

Since August 2017, EWEA monitoring started to flag worrying signs in Kassala state. In July, two indicators, unusual livestock movement and extended dry spells, surpassed various thresholds. When the September-October monitoring results revealed further deterioration, including the price of sorghum rising above the annual average, the first early action was rolled out in October – a needs assessment to understand which resources would be affected and potential interventions to help pastoralists mitigate the impact of the dry spells.

By December 2017, when other early warning outlets were only starting to raise the alarm about the situation, FAO had already begun its early action activities. Thanks to Belgian contributions through the Special Fund for Emergency and Rehabilitation Early Action Fund, FAO is able to support 35 000 people and an estimated 30 000 livestock. Beneficiary communities receive supplementary animal feed, animal health treatments and water management systems. As a result of the dry spells, the lean season is expected to start three months earlier than usual. These early actions will be implemented before the peak of the dry spell to protect breeding and yearling livestock throughout the high-risk period.

Thanks to the EWEA system, FAO was one of the first agencies to warn about the situation in Kassala and the first to intervene for livelihood protection. As the situation deteriorated and the results of the rapid survey revealed concerning conditions in Kassala, FAO shared these results with key partners such as the World Food Programme and the United Nations’ Food Security and Livelihoods Cluster, thereby contributing to a wider awareness and recognition of the situation.

In the Sudan, FAO collaborates closely with government agencies, civil society and affected communities to protect the livelihoods of thousands of pastoralists.