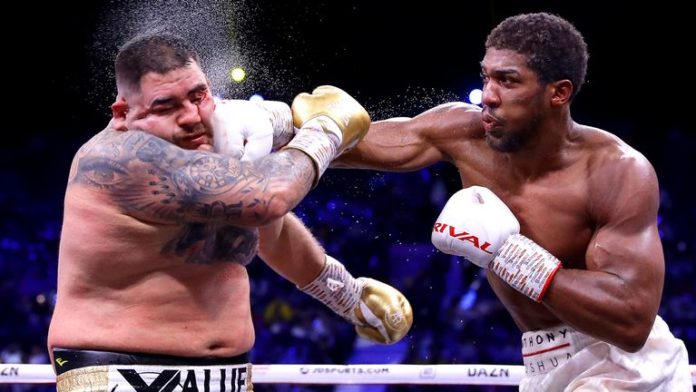 By Richard Damerell and Anthony Guppy

Anthony Joshua’s semi-final opponent at an amateur event never stepped in the ring, his name is even spelt incorrectly on the world champion’s record, and Simon Haddon nearly rejected boxing after being denied his chance to withstand Britain’s fearsome young talent.

“I preferred not to know who my opponents were, to be honest with you, but I found out about Anthony Joshua,” recalled Haddon, a South East champion, who had compiled a promising record before securing his fight with Joshua in the semi-finals of the English ABAE Nationals.

A raw and rugged version of Joshua had quickly made himself known at Finchley Amateur Boxing Club, blitzing out opponents, despite heavily padded gloves and head guards.

Unbeknown to Haddon, Joshua’s name would soon be muttered ominously at Willingdon Trees Boxing Club, a smaller base for amateurs in Brighton where he had been preparing for his most significant bout.

The tall, rangy fighter had trod a similar path towards boxing as Joshua, with both seeking out the sport’s discipline and controlled aggression, rather than pursuing a troublesome teenage lifestyle. Haddon’s formative fighting years had been spent in Dorset, with respected trainer Ben Geyser before he uprooted to Brighton, while Joshua’s concussive power had been primed by Sean Murphy, his Finchley mentor.

Sussex’s Scott Welch, the battle-scarred former world heavyweight title challenger, had even assisted Haddon in training. With his age now creeping into the 30s, the former soldier initially paid little regard to his next foe, but gradually acquired a daunting assessment as he scoured for Joshua’s footage and stats.

“Just a young kid coming through the ranks,” said Haddon, when asked about his first impressions of ‘AJ’. “I looked on the internet and seen snippets of him.

“I was reading it up in the boxing mags as well. I was reading about how he was getting on and thought, ‘ah, okay, I’ve got a heavy hitter here.”

Concerns raised by coaching staff were swiftly shrugged off by Haddon, who yearned for those enticing few minutes in an opening round, the moment of brutal clarity when a savvy veteran finds out whether he can defuse an explosive prospect.

But the fight never happened.

“The coaches at Willingdon were saying, ‘this is the next up and coming kid.’ I thought okay, fair enough.

“A few weeks later they said, ‘we don’t want you to box him.’ I was like, why not? I would get in the ring with anyone, even if they would have beaten me, that’s my mentality.”

Haddon walked out of the club and away from boxing for almost two years. With a free pass to the final, Joshua blasted aside Dominic Winrow in the first round to win his first senior title, and he would be fast-tracked to join the elite amateurs in Team GB.

Joshua would be targeting Olympic gold in London when Haddon eventually walked back through the gym doors and healed the rift with his trainers.

Next Friday we’re showing every @AnthonyfJoshua fight on Sky Sports Action throughout the day.

Here he is before his pro debut against Emanuele Leo 👇 pic.twitter.com/KYFCRkItVe

“I think [it was] because of his reputation,” said Haddon. “He was hard-hitting and still is hard-hitting. He was knocking out everyone left, right and centre, and I was getting a little older as well.

“I understand now, it was for my safety. I get it.

“My missus said: ‘You’re going to regret it for the rest of your life now.’ I thought, will I? Now look.”

A decade onwards, Joshua has regained three world heavyweight titles following a rematch win over Andy Ruiz Jr in Saudi Arabia. Haddon follows his fortunes again, as a fan rather than a rival, but it does not stop him visualising how the fight could have played out.

“I was pretty fit, and I would have tried to outbox him as much as I can.

“I used to like a fight as well, but it’s not my ball game. Very much like Tyson Fury, dance about, quick for a heavyweight, I’m light on my feet.

“Try and out-jab him. Watch out for his right hand.”

And if they did finally cross paths, would he try to jolt Joshua’s memory?

“Definitely. If he wants to spar, he can call me back, but I would have to train again.”

You can watch of all of Anthony Joshua’s professional fights On Demand now!

Ransley retires due to Tokyo postponement