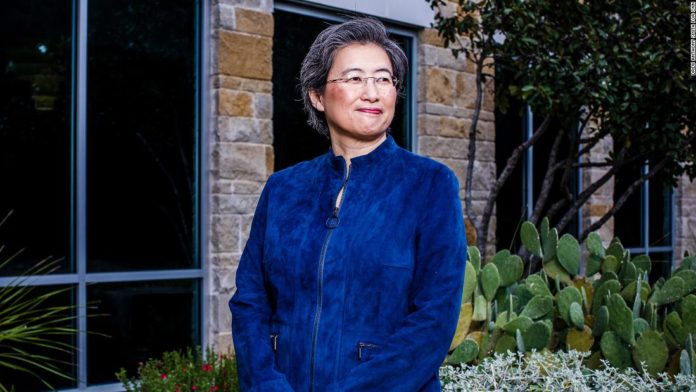 “When you grow up as a tech person — and I spent my career in semiconductors — there aren’t that many large US semiconductor companies. So I was really excited to become CEO,” Su told CNN Business. She liked that she could walk around a Best Buy and pick up a laptop, knowing that the microchip or processor her company built was powering it.
Not everyone would have been so enthusiastic. When Su took the helm of AMD in 2014, its stock was heading toward an all-time low.
But Su, now one of the most powerful women in tech, likes a challenge. She says that’s why she became an engineer in the first place. She had to make bold bets — some of which wouldn’t begin pay off for five years — to turn AMD around.
“The reason it takes so long is it is extraordinarily complex,” Su said. “Our latest chip for data centers is actually 40 billion transistors … you’ve got to get every single one of them right and there’s just a lot of engineering to do that.”
Su, who holds bachelor’s, master’s and doctorate degrees in electrical engineering from the Massachusetts Institute of Technology, decided the company would go big on building technology for high performance computing applications. That set AMD up to power crucial next-generation tech including cloud computing, data centers, artificial intelligence and gaming.
Those technologies are dominant in 2020. But Su had to start laying the groundwork in 2014.

The semiconductor industry is inherently risky. Each new product development cycle takes around three to five years, so companies must bank on the fact that the technologies they’re creating today will be what customers are looking for a few years down the road, and that they will beat out products from rivals.
And they can’t be one-hit wonders. Nabbing high profile clients required creating a “technology roadmap” that would convince them the company could consistently roll out high-performing updates and new products.
Related: See the 20 Risk Takers pushing global business forward
“The most important thing for us back in 2014 was, first, choosing the right markets that were good for technology, ” Su said. “It’s not what you do today but it’s really what you do year after year, after year that people pay attention to.”
The bets paid off. These days AMD is soaring. Since Su became CEO in October 2014, the company’s shares are up more than 1,300%, despite the fact that AMD, like many tech companies, has taken hits from the US-China trade war and, more recently, from disruptions caused by coronavirus.
Last month, AMD’s stock hit its record high around $59 per share. It was the best performing stock in the S&P 500 in 2019, growing nearly 150% during the year.

Discovering what AMD is ‘really, really good at’

Several years before Su became chief executive, AMD had taken steps to cut costs by getting out of certain areas of business, including spinning off ownership of the foundry that manufactured its semiconductors.
When Su took over, some of her biggest decisions were about what not to do.
“It is really important when you’re a technology company to decide what you are really, really good at because you have to be the best, number one or number two,” Su said. “It’s all about focusing on, ‘Hey, this is the DNA of the company, let us make it as great as possible in terms of what we can bring to the market.'”
But doing that also meant thinking critically about which areas AMD was less likely to dominate. The company decided not to pursue building technology for mobile phones or sensors for “internet of things” machines — promising areas of development but ones that fell outside of AMD’s core competency.
Instead, the company decided to make a big bet on high performance computing architecture, including powerful computer processors and graphics chips for gaming, artificial intelligence, super computing and other “bleeding edge” technologies. AMD was building fast and powerful chips, and often undercutting its competitors on price.
The strategy was especially important for a company that, at the time, was struggling to carve out a niche for itself in an industry dominated by a relatively small number of key players.
AMD’s products are so convincing that the US Department of Energy chose AMD’s chips to power its supercomputer project at the Oak Ridge National Laboratory in Tennessee. Its technology will also help to power the upcoming exascale class supercomputer at the Lawrence Livermore National Laboratory, the kind of high performance computer crucial for nuclear deterrence.

Semiconductor companies long ran on what’s referred to as a “tick tock” development cycle.
Companies would alternate between improving the manufacturing process for chips, and improving the design details within the chips themselves. That way, if something doesn’t work, it’s easy to tell which piece of the system is broken.
But AMD was desperate for a boost, so it decided to tackle both of those things simultaneously, creating an entire new product portfolio.
“They made huge bets in terms of process technology, architecture and packaging,” said Hans Mosesmann, managing director at Rosenblatt Securities, comparing the success of the move to “planetary alignment.”
“It’s a once-in-a-generation thing that you’re able to do that.”Early on some potential customers questioned whether the company would be able to execute on such an ambitious plan.
“There was a little bit of convincing,” Su said. “The way we approached it was: ‘Look, let me tell you what I’m going to do and … it’s going to take me three years before I have anything for you to look at, but I’m going to keep telling you, I’m going to keep showing you.’ And that’s really what we’ve done.”
AMD released the first generation of the new product portfolios that resulted from those efforts, desktop processors called Ryzen and server processors called Epyc, in 2017 and just this year released updated versions.
“The first generations of Ryzen and Epyc were kind of like, ‘Okay, we think you did a good job here, what’s the follow up?'” said Kevin Krewell, principal analyst at Tirias Research. “The second generation have now convinced the market that they are serious.”
The company plans to release third generation products later this year.

While Su was turning AMD around, major rival, Intel, was sputtering.
Intel struggled to move from a 14 nanometer chip to a smaller, more powerful 10 nanometer chip. During that difficult transition, Intel’s supply of 14 nm chips used in personal computers failed to meet demand last year — an issue that forced it to release an unusual public apology in November.
Meanwhile, AMD brought a processor equivalent in power to the 10 nm chip to market ahead of Intel, and developed a product architecture that allows it to keep costs low.
Intel’s challenges have cleared the runway for AMD to grab a larger slice of market share in key areas.
“(Intel’s) lack of execution and AMD’s flawless execution has yet to play out in terms of the market share AMD is going to gain in the coming years,” Mosesmann said. “I wouldn’t be surprised if they captured half the data center market.”
The data center market has become a priority for AMD, as a growing number of companies look to shift their operations to the cloud and as data intensive next-generation technologies, like 5G, begin to emerge.
It’s an industry that could present a $20 billion to $30 billion opportunity for semiconductor companies over the next few years, according to Mosesmann.

The next challenge: coronavirus

Coronavirus — and the damage it has inflicted on economies around the world — has raised questions about what the future holds for many companies. However, Krewell said, semiconductor companies will likely benefit from the fact that their manufacturing and production processes are largely automated.
In the short term, coronavirus may even be a boon to the company as more people stock up on powerful laptops and gaming systems powered by AMD technology for work and entertainment at home, Krewell said.
AMD still likely has a significant runway to grow in the coming years.
“It’s a very, sort of, high stakes, high reward place and our goal is to continue to make the right bets year after year,” Su said.
“As proud as I am of what we’ve done over the last five years, there’s no question in my mind that the next five years are going to be even more competitive and we need to make those bets. We’re making a ton of bets now. Every day we talk about, ‘Hey, how should we build our roadmap for the future?’ And that’s our world.”