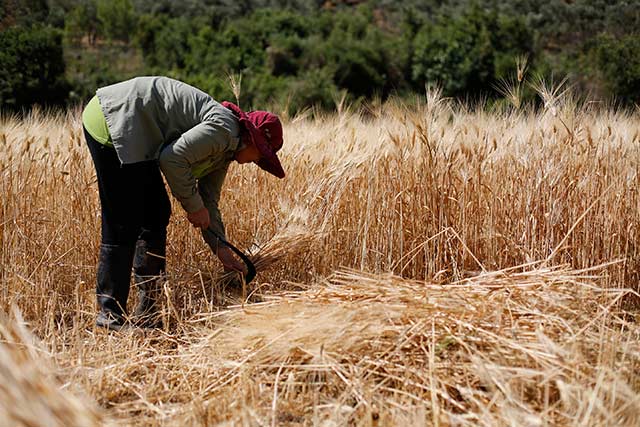 Before the Syrian crisis started in 2011, agriculture was a major part of the country’s economy, employing nearly half the population. More often than not, it was also a family business. When a husband passed away, the surviving wife and other family members would chip in to make sure the family could make ends meet.

After the loss of her husband, 56-year-old Munira al-Khateeb, from a village in the governorate of al-Sweida, south of the capital Damascus, had no choice but to find a source of income for herself, her daughter, and three grandchildren, all living under one roof. To support her family, she started baking and selling fresh Arabian bread. But the Syrian conflict, now in its seventh year, resulted in inadequate supply of reasonably-priced wheat and fuel, forcing al-Khateeb to close down the bakery and instead rely on the sale of apples from a plot of land attached to her house.

The effects of the years of conflict on agriculture and rural livelihoods in Syria have resulted in the disruption of the supply of agriculture inputs (notably seeds and fertilizer), a sharp decrease in crop production, significant reduction in livestock numbers, and sometimes irreversible destruction of assets such as irrigation structures, farm machinery and storage, and processing facilities. To address these issues and strengthen the resilience of agricultural livelihoods, an FAO programme, provided close to 217 200 people in rural and peri-urban areas with agricultural inputs for crop production in 2016 -2017.

Al-Khateeb and 3 500 other families in Rural Damascus and al-Sweida received wheat and chickpea seeds, with the support of a project funded by Norway. The beneficiaries also received training on topics such as production capacity improvement, climate-smart agriculture, conservation agriculture, and post-harvest management. “Although it was very hard for me [either] to stay at home or to find another job, I believed that I would find a way to live and raise my children,” she said. “I didn’t give up; I produced 800kg of wheat.”

Using her newly-acquired seeds and knowledge, al-Khateeb has not only diversified the types of bread she makes but has also reached an agreement with a bakery in the area to sell excess products. “I resumed my bakery activities together with my older daughter; now, all our daily fresh bread is sold to the surrounding neighbors,” she said happily.

“Since 2011, FAO has implemented 29 projects in Syria, supporting agriculture-based livelihoods and promoting agricultural production, reaching over 2.9 million people to strengthening their resilience for food and nutrition security across the country,” said Adam Yao, FAO Representative a.i in Syria.

India: Interfaith dialogue on dignified management of the dead during COVID-19

Teaming up to defend against locusts