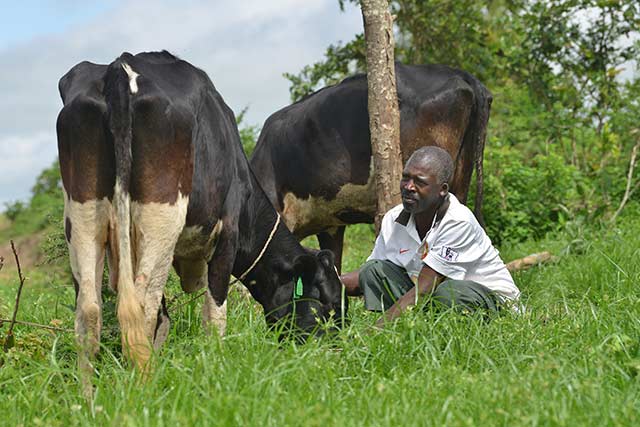 With three consecutive rains failed in his county, 51-year-old Harrison Kazungu Karisa became increasingly concerned. The poor rains resulted in drier conditions, reduced pasture and limited water resources. The beginning of a drought was evident and would have devastating consequences for his main way of making a living – livestock.

Drought is a recurring hazard in Kenya, with various degrees of intensity and frequency across the country. Evidence suggests climate change may be driving an increase in intensity and frequency of drought events. Most recently the lack of rainfall has fuelled a worsening food crisis, with over 2.6 million people classified as food insecure.

In the case of Kenya, FAO alongside the National Drought Management Authority established an Early Warning Early Action (EWEA) system in mid-2016 to mitigate drought. The system takes a new approach to crises and focuses on early actions that could be taken to mitigate or prevent the impact of hazards before they strike.

With the system in place, in early November 2016 signs of drought were detected through a range of indicators including rainfall, vegetation indexes, and livestock conditions among others. This alerted FAO to act. To respond to this early warning, the newly established FAO Early Action Fund released USD 400 000 to protect livestock of vulnerable communities in identified high-risk areas.

Harrison received nutritional blocks and supplementary feed from FAO. Before the feed was distributed, Harrison began purchasing grass from “far flung areas such as Kaloleni, which had some grass reserves. At a certain point, I even had to pluck leaves from the bush, stack in a sack and carry them back for the cattle to eat as we had totally run out of grass”. However, as even these reserves depleted and the drought intensified, Harrison realized “this was a huge problem, but luckily I received a phone call advising me to go to the local government office to take part in this project”.

Harrison owns five cows and during the peak of the drought he managed to keep all his livestock alive, thanks to the preventive measures. The supplies provided much needed support to Harrison: “The livestock feed helped me tremendously. Now if you look at my cattle they are very healthy. I usually mix the food with plain grass, then feed the cattle, together with some water. This has helped them gain weight. There is also potential for me to have calves as well; prior to the feed, the cows were unable to breed”.

Since receiving the feed, Harrison’s cows have also increased their milk production: “at the moment, my cows are producing nine litres per day. Their milk levels had started to drop due to the drought conditions to an extent that each cow would produce a single litre. Now there is significant improvement”. He now makes a steady income from the milk charging Ksh. 50 (USD 0.50) for one litre – he has resisted over-inflating his prices, as the price of milk has increased during the drought, as he would like to support other vulnerable households and keep his community healthy.

With seven children and three of them in secondary school, the income from the milk has also provided much needed economic relief to the family. Harrison would “borrow money from a micro financial institution to pay their school fees and then use the monthly sales from my milk to repay. It has helped me a lot”.

By acting early and safeguarding Harrison’s stock, he was able to maintain the health of all his cattle and continue to sell and trade during the peak of the drought. While drought continues in Kenya, Harrison’s story highlights the importance of acting early. FAO recognised the need to take action before a crisis escalates into an emergency and such action is a wise investment. Stepping in early to take action builds resilience and reduces both disaster losses and the costs of emergency response.