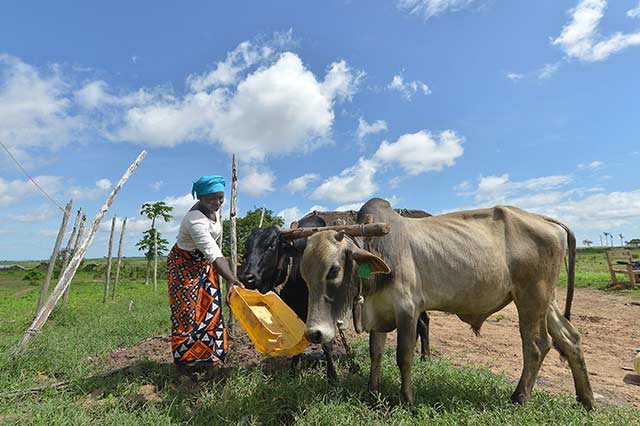 46 year-old Mlongo Mwanyasi depends on her livestock – a livelihood and tradition inherited from her forefathers that she has kept going. Her animals’ health is critical for her economic stability: “I need them to sell to educate my children. I also keep them for ploughing and for food. My children are still young and I do not have any other alternative source of income, so my main job is selling cows so that I can buy medicine and take care of my children”.

However, a recent visit to Mlongo Mwanyasi’s home revealed her livestock paddocks to be bare of fodder. Very little pasture has grown in her area over the past few months. A little over three months ago, Mlongo was at risk of losing her livestock, as Kenya is being impacted by one of the worst droughts in half a century: “We have experienced droughts in the past, but they never lasted this long. A drought would rage for two to three months and then dissipate by the fourth month after the arrival of rains. This one is very severe”.

The nation has experienced back-to-back failed rains for a third consecutive season. Lack of rainfall has resulted in a worsening food crisis, with over 2.6 million people food insecure. Pastures remain dry and crop harvests continue to fail. To prevent the loss of her livestock, Mlongo was assisted through FAO’s Early Action Emergency Feed Programme. Before receiving support, Mlongo recalls seeing the first signs of her livestock growing weak due to the worsening conditions.

“These animals couldn’t get up. There is this particular female cow, which had to be lifted. I would lift her up and assist her to walk to the forest so that she could graze, but this was not possible. She was so weak that she was not rising up at all. So I would go the forest to collect leaves and then bring back to where she lay here at home so that she could eat”.

FAO’s Early Warning Early Action (EWEA) is a new approach to crises. It takes a step back and focuses on what early actions can be taken to mitigate or prevent the impact of hazards before they strike. In the case of Kenya, FAO alongside the National Drought Management Authority established the system in mid-2016 to mitigate drought effects within the first severely hit areas – a common threat in the country. Signs of severe drought had been detected through a range of indicators including rainfall, vegetation indexes, and livestock conditions among others. This alerted FAO to act. To respond to this early warning, the newly established Early Action Fund released USD 400 000 to protect livestock of vulnerable communities in the first identified high-risk areas. Interventions included animal health treatments, livestock market management and animal feed distribution. As a beneficiary of the feeding programme, Mlongo received two sacks of 70kgs of livestock feed and 15 multi-nutrient blocks to support her key breeding stock.

As a result of the feeding programme, Mlongo was able to ensure her key breeding stock was again eating regularly and regaining their health – just as fodder was running out: “FAO has helped us a lot because when I feed her, I add the leaves and eventually she has become stronger and was able to get up. She has been eating well here at home and now she also goes into the forest.  She is now able to eat the feed that was provided, the leaves and some grass”.

To Mlongo’s surprise, one of her key breeding cows was able to give birth to a live calf “because of eating the feed and getting sufficient energy from the food. I am very grateful because had it not been for this food, she may have died”. For Mlongo, her future holds some hope and in Kenya, where food insecurity continues to increase due to the drought, FAO continues to support pastoralists to help woman like Mlongo maintain their livelihoods and support their families.