Home Top News Hunger remains widespread in South Sudan despite the start of the harvest... 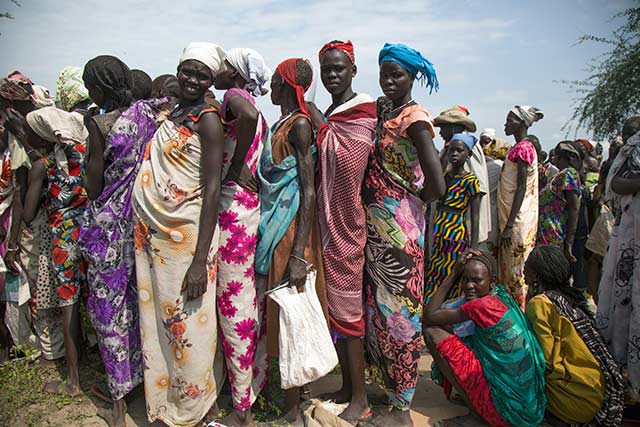 The current harvest season in South Sudan will not end the hunger crisis as conflict persists in most of the country and hyperinflation puts food out of reach for many, according to the updated Integrated Food Security Phase Classification (IPC) released today by the Government of South Sudan, the UN’s Food and Agriculture Organization, UN Children’s Fund, the World Food Programme, and other humanitarian partners.

The number of people experiencing severe food insecurity across the country is likely to drop to 4.8 million for October to December, down from six million in June. However, the 4.8 million who are severely food insecure are 1.4 million more than at the same time last year, and much of this growth has been in the Emergency category (step 4 on the IPC’s 5-step scale).

“The harvest season has not brought much relief to the millions of people in South Sudan who don’t have enough food. The country’s greenbelt has been ravaged by fighting, and finding a peaceful solution to this man-made tragedy should be the top priority or the situation will get even worse next year,” said Serge Tissot, FAO’s Representative in South Sudan.

The food security situation is projected to deteriorate at the start of 2018 and the ‘hungry season’ – when households typically run out of food before the next harvest – is forecast to start three months earlier than usual. Many people have few means of coping with the stresses of the lean season, and the situation is forecast to become increasingly fragile.

“A massive humanitarian response helped stop famine in parts of the country this year. But even in the current harvest period, millions of people need sustained assistance to survive,” said Adnan Khan, WFP Representative in South Sudan. “It is chilling to see that in a worst-case scenario, similar conditions could appear in multiple places in the lean season in 2018.”

The teams who conducted the analysis identified two counties, Wau and Ayod, where a total of 25,000 people are facing catastrophic conditions according to the IPC scale. Of greatest concern is Greater Baggari, a sub-area of former Wau, where at least 15 per cent of the population is facing famine-like conditions because insecurity has heavily constrained livelihood activities and humanitarian assistance. There is an urgent need for a humanitarian corridor from Wau to Greater Baggari area to allow agencies to provide comprehensive assistance.

Malnutrition has also worsened compared to the same period last year, with surveys showing malnutrition rates in most communities well above the World Health Organization’s emergency threshold of 15 percent, and with more than 30 percent of the population malnourished in several counties. More than 1.1 million children under the age of five are forecast to be malnourished in 2018, including nearly 300,000 severely malnourished and at a heightened risk of death.

“Too many children are going hungry in South Sudan. More than one in five of those struggling to feed themselves is a child under five years of age,” said Mahimbo Mdoe, UNICEF’s Representative in South Sudan. “This has created a malnutrition crisis that is putting many lives at risk.”

Insecurity continues to hamper food production and disrupt markets. Coupled with a failing economy, this has led to extremely high food prices. Large sacks of staples such as sorghum, maize, and wheat flour have increased in price by up to 281% compared to last year, and were as high as 560% during May, the peak of the lean season.

In Juba, a 100kg bag of sorghum costs 11 285 South Sudanese Pounds (SSP), compared to 4 314 SSP a year ago, and is vastly beyond what most families can afford. Nationally, millions of people are surviving on humanitarian assistance in South Sudan, and if security conditions further threaten organizations’ operations the situation will rapidly worsen.

The report warns that continued conflict coupled with further access constraints on aid agencies and economic instability will likely result in the deterioration of already dire conditions in multiple locations across South Sudan in 2018.

Humanitarian teams are facing enormous logistical and security challenges to reach communities in need. FAO has provided fishing, crop- and vegetable-growing kits to more than 4.2 million people, many in difficult to reach or conflict-affected areas, to support them to grow or catch their own food. FAO has also vaccinated more than 4.8 million livestock, to protect these livelihood assets for vulnerable families.

UNICEF, together with its partners, has treated more than 160,000 children with severe acute malnutrition (SAM) so far this year. It has a target for the year of reaching 207,000 malnourished children across the country. As part of its multi-sectoral approach to addressing the issue, UNICEF has also provided over 750,000 people with safe drinking water and a further 230,000 people with access to sanitation facilities.

WFP and its partners have has assisted 4.6 million people in South Sudan so far in 2017 with cash or food, including nutrition support for children under the age of five years. Emergency mobile teams usually travelling by helicopter on over 135 missions to areas isolated by conflict have supported 1.8 million people this year.