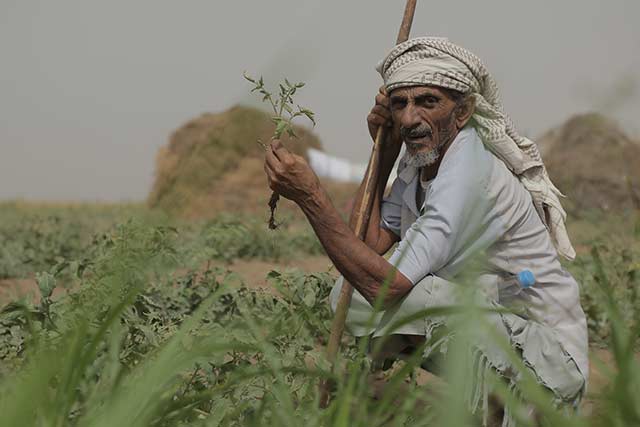 The Government of Kuwait has contributed US$ 2 million to boost FAO’s emergency agricultural interventions and improve food security and nutrition in Yemen. The Kuwaiti funding in support of FAO’s Humanitarian Response Plan for Yemen will be crucial in providing assistance to some of the 8.6 million severely food insecure Yemenis.

“This new agreement reinforces the relationship between the State of Kuwait and FAO,” said H.E. Jamal M. Al Ghunaim Ambassador Permanent Representative of the State of Kuwait to the U.N. in Geneva. “We aim to work closely together to accelerate humanitarian efforts towards the people of Yemen and other countries in the Near East region who are suffering from conflicts.”

Yemen remains the world’s largest humanitarian crisis. The protracted crisis has taken a devastating toll on the economy, collapsing essential services and exhausting the population’s coping mechanisms, leading to widespread food insecurity and malnutrition. This new contribution will build on gains made through previous Kuwaiti funding.

“Kuwait and FAO are building a strong partnership to fight hunger and malnutrition in the Near East and North Africa region (NENA). Kuwait today generous grant will strengthen the resilience of farmers and herders of Yemen. It adds  to Kuwait recent contribution to the farmers in Syria”, said FAO’s Abdessalam Ould Ahmed, Assistant Director-General and Regional Representative for NENA.

Building on a successful partnership

The Kuwait-FAO ongoing partnership is already delivering emergency agricultural interventions and working to improve food security and nutrition in Yemen. Repair and rehabilitation of water and irrigation networks is one of the most pressing needs in addressing Yemen’s declining agricultural output and, therefore, in addressing its broader food security crisis.

The project is in the process of setting up small-scale water infrastructures, which will see almost 11 000 farmers benefit from the availability of water for agricultural purposes. The works involve rehabilitation of shallow wells, cleaning rehabilitating and constructing canals, terraces, water harvesting tanks and protection walls.

The rehabilitation and construction work is being done by the local community and internally displaced populations in the project’s targeted areas. Targeting both IDPs and host communities alike is helping to de-escalate tension that has been rising in the area. Due to the protracted conflict, thousands have fled their homes and settled in new areas, putting a strain on limited natural resources like water. Through Cash-for-Work modality over 6,500 vulnerable people will receive much-needed income through temporary employment. This new funding will also allow current efforts to be scaled-up to include additional farmers.

“This generous contribution will help FAO secure and restore agricultural livelihoods. By promoting self-reliance of communities, we are trying to ensure families continue to produce food for themselves even in times of crisis”, said Hussein Gadain, FAO Representative in Yemen.

According to the Crop Prospects and Food Situation report issued recently by FAO, Yemen remains among the top in the list of the 41 countries requiring external food assistance. Conflict and insecurity continue to be the main drivers of food insecurity in the country.

The conflict has devastated people’s livelihoods, limited income opportunities and reduced their ability to purchase food. This dramatic deterioration destroyed households’ ability to cope. Any changes in their circumstances, or a further disruption in food access, is likely to push communities to the brink of famine.

Agriculture is not just the main source of livelihood and income for millions of Yemenis, it represents one of the few remaining lifelines, especially for hard to reach rural areas. Humanitarian food assistance alone cannot meet the country’s needs. Livelihoods support interventions thus play a critical role within the humanitarian response – safeguarding and rapidly scaling up food production and therefore increasing food availability among the most vulnerable.