Home Culture Who should play Joe Exotic in a “Tiger King” movie? 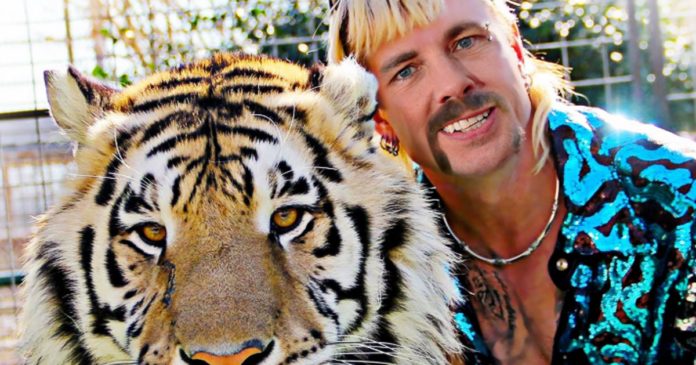 Dax Shepard and Edward Norton are both vying to play Joe Exotic, the star of Netflix’s new documentary series “Tiger King: Murder, Mayhem and Madness,” even though a feature film adaptation hasn’t even been announced. And as fans of the show have learned, there can be only one Tiger King.

“If I don’t get cast as Joe Exotic in the eventual biopic, Hollywood is broken,” tweeted Dax Shepard, days after the show dropped on the streaming platform earlier this month. Exotic is the larger-than-life star of the seven-part series, which chronicles the eccentric world of private ownership of big cats in the U.S.

Twitter account @photoshopped_af even tweeted a photoshopped image of Shepard’s face on Exotic’s body after the actor expressed his interest. Shepard retweeted the image, writing, “This is a great first step.”

But Shepard isn’t the only star who thinks he could do justice to the role. Academy Award-nominated actor Edward Norton fired back at Shepard on Twitter, “Um, step aside, pal. You’re way too young and buff and you know it.”He then suggested Shepard play Travis Maldonado, the late husband of Exotic, instead.

The series focuses mainly on the feud between Exotic, who once owned an Oklahoma zoo with big cats, and Carole Baskin — an outspoken animal rights activist who operates Florida animal sanctuary, Big Cat Rescue. Eventually, their feud resulted in Exotic participating in bungled murder-for-hire plots to kill Baskin. Exotic was arrested and convicted of two counts of murder-for-hire, as well as multiple wildlife violations. He was sentenced to 22 years in prison this past January.

While Exotic and Baskin may be the show’s main subjects, the series portrays a cast of unique personalities. The show profiles Mahamayavi Bhagavan “Doc” Antle, the founder of the Institute for Greatly Endangered and Rare Species (T.I.G.E.R.S.) in South Carolina, who is regularly seen riding around on an elephant in the docu-series; John Finlay, Exotic’s ex-husband who left him to be with a woman who worked at Exotic’s zoo, and many others.

SNL cast member Mikey Day seconded that Shepard would be a great choice for Exotic, floating a few other casting possibilities, as well. “I for reals thought that several times while watching,” Day tweeted at Shepard. “Maybe a K[risten] Bell cameo as one of Doc Antle’s tiger girls? [John] Bautista as John Finlay? If I were you, I’d start growing a lockdown mullet immediately, dude.”

“Tiger King” hit Netflix on March 20 and as of Monday is the most popular show on Netflix in the U.S., according to the streaming platform’s top 10 section.