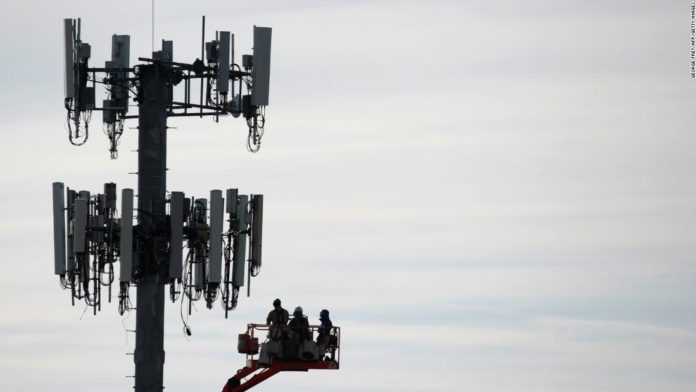 Mobile operators said Monday that there have been at least five instances of vandals setting fire to towers in the United Kingdom in the past few days.
Some YouTube videos claiming a connection between the virus and the new super-fast wireless technology have racked up hundreds of thousands of views.
In a joint statement, BT Group’s (BTGOF) EE, Telefonica’s (TEF) O2, Vodafone (VOD) and Three, owned by CK Hutchison Holdings (CKHUY), said claims 5G is in any way connected to the coronavirus pandemic have no basis in fact, a statement echoed by experts and multiple government agencies around the world.
“Not only are these claims baseless, they are harmful for the people and businesses that rely on the continuity of our services. They have also led to the abuse of our engineers and, in some cases, prevented essential network maintenance taking place,” the mobile network operators said in the statement.
Many social media and internet platforms have already taken some steps to stem the spread of misinformation surrounding coronavirus, banning content that references fake treatments and cures and highlighting reliable information in search and in feeds. But conspiracy theories such as the false 5G connection have fallen into a gray area.
Google’s (GOOGL) YouTube calls such videos “borderline content” which means they are not in direct violation of its policies. But the company said in a statement to CNN Business on Monday that the videos could lose advertising revenue and will be removed from search results. The company said it is also reducing recommendations of such content in its algorithm.
In the wake of the arson attacks, UK Prime Minister Boris Johnson’s spokesperson on Monday called on social media networks to do more to remove such false information.
“By destroying these masts people are actually putting lives at risk because they are masts used by the emergency services,” the spokesperson told reporters.
5G allows greater and faster data processing, and is seen as an integral component of new interconnected technologies such as automated vehicles and smart appliances.
But false conspiracy theories surrounding 5G’s connection to the novel coronavirus have been around since the virus first emerged in China. There is no evidence linking 5G technology and the spread of coronavirus.
On Twitter (TWTR), a quick search for “5G coronavirus” on Monday turned up several blatantly false conspiracy theories in the “Top” results, including some that had thousands of retweets.
A spokesperson said Twitter is increasing its use of machine learning and automation to help take down false information.
“We will continue to take action on accounts that violate our rules, including content in relation to unverifiable claims which incite social unrest, widespread panic or large-scale disorder,” the spokesperson said. “If people see anything suspicious on our service, please report it to us.”
On Facebook (FB), a search for “5G and coronavirus” yields mostly reliable information from major news networks, hospitals and health organizations. But a search for just “5G” pulls up the false theory of a connection.
Some videos claiming the connection carry a warning saying they have been deemed false by fact checkers. But users can still view the videos, some of which have tens of thousands of views, and comment if they wish.
In a statement, a Facebook spokesperson said the company is taking “aggressive” measures to combat misinformation surrounding the virus, and is “starting to remove false claims which link Covid-19 to 5G technology” and which encourage attacks on cellular towers.
— Eoin McSweeney and Luke McGee contributed to this report.