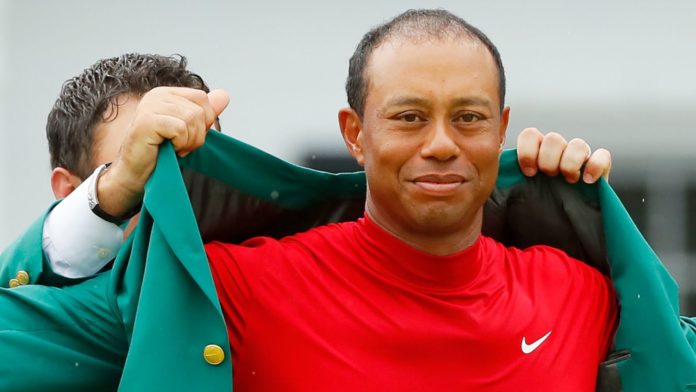 Reigning Masters champion Tiger Woods hosted a “quarantine style” Champions Dinner of his own, with golf’s opening major of the year having been postponed due to the coronavirus.

Woods was due to begin the defence of his fifth Masters title on Thursday, but the tournament has been pushed back to November due to the ongoing pandemic.

It’s Augusta tradition for the previous year’s winner to host – and select the menu for – a champions dinner ahead of the tournament, attended by only former champions and the club chairman.

Masters Champions Dinner quarantine style. Nothing better than being with family. pic.twitter.com/xPK769CWCf

Woods posted a photo of himself on Wednesday evening with his girlfriend Erica Herman, and his children Sam and Charlie, as they sat down for a meal of their own at his South Florida home.

“Masters Champions Dinner quarantine style. Nothing better than being with family,” Woods wrote on Twitter.

The 44-year-old was wearing his Augusta green jacket, while there was a replica of the Masters trophy placed in the middle of the table.

Woods’ win ended an 11-year wait for his 15th major title and moved him within three of Jack Nicklaus’ all-time leading tally.

The American hasn’t played in a tournament since finishing 82nd at the Genesis Invitational in February, after which he missed a run of key events, including the Players Championship, with a back injury.

With the major tours already indefinitely suspended, on Monday it was announced that this year’s Open Championship, which Woods has won three times, has been cancelled, while the other three majors have been rescheduled.

The USPGA Championship is now set to take place in August, followed by the US Open in September, and the Masters in November, with the Ryder Cup keeping its position at the end of September.