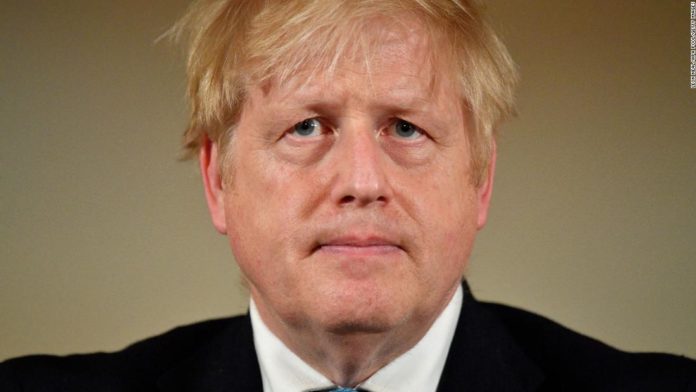 Johnson is in a stable condition, according to junior health minister Edward Argar.
“I understand the Prime Minister is in a stable condition,” Argar told the UK’s Sky News on Wednesday morning. “He’s comfortable and in good spirits. He has — in the past — had some oxygen but he’s not on ventilation.”
It’s unclear when Argar was last briefed on the Prime Minister’s condition. On Tuesday, Cabinet Office minister Michael Gove acknowledged that fellow ministers were taken by surprise when they found out Johnson had been taken into intensive care.
A Downing Street spokesperson said on Tuesday evening that Johnson, 55, was still “in intensive care for close monitoring” and “in good spirits.”
UK Foreign Secretary Dominic Raab, who Johnson has nominated to deputize for him while he is in hospital, said at Tuesday’s coronavirus briefing that the Prime Minister was receiving “the very best care from the excellent medical team at St Thomas’ hospital” in central London.
Raab, 46, said Johnson had been given “standard oxygen treatment” and was “breathing without any assistance.”
He said the PM had “not required mechanical ventilation or non-invasive respiratory support.”
Raab, who is also First Secretary of State — the most senior minister in Johnson’s cabinet — added: “I’m confident he’ll pull through because if there’s one thing I know about this Prime Minister, he’s a fighter and he’ll be back at the helm leading us through this crisis in short order. And for us in the cabinet, we know exactly what he wants from us and what he expects from us right now.
“I can reassure the Prime Minister, and we can reassure the public, that his team will not blink, and we will not flinch from the task at hand at this crucial moment. We will keep all of our focus and all of our resolve, with calm determination on delivering the government’s plan to defeat the coronavirus.”
The Prime Minister was taken to hospital on Sunday evening. At the time, Downing Street said the decision was a precaution because he continued to suffer from a cough and a fever ten days after testing positive for the coronavirus.
But his condition deteriorated on Monday, Downing Street said, and he was moved to the intensive care unit at St. Thomas’ Hospital, close to the Houses of Parliament.
Related stories
The seriousness of the Prime Minister’s condition at a time of national emergency, combined with the lack of a formal succession procedure for heads of government in the UK, has raised questions about who is leading the country.
Few formal powers are invested specifically in the PM, and key decisions are taken collectively by the cabinet or its sub-committees. Many statutory powers are held by individual secretaries of state. But in recent decades, holders of the UK’s top political office have adopted a more presidential style, and the sweeping nature of the ruling Conservative Party’s most recent election victory was attributed to Johnson’s personal appeal with voters.
There is no recent precedent for a sitting UK prime minister becoming incapacitated for a lengthy period.
Decisions relating to Covid-19 will be taken in the usual way through the daily morning meeting, chaired by Raab, and other ministerial groupings. Raab will not have powers to hire and fire ministers and Johnson’s weekly audiences with the Queen will not take place for the time being.
Leaders from around the world, including President Donald Trump, have expressed their concern for the UK PM and hopes for his rapid recovery

CNN’s Luke McGee and Angela Dewan contributed to this report.