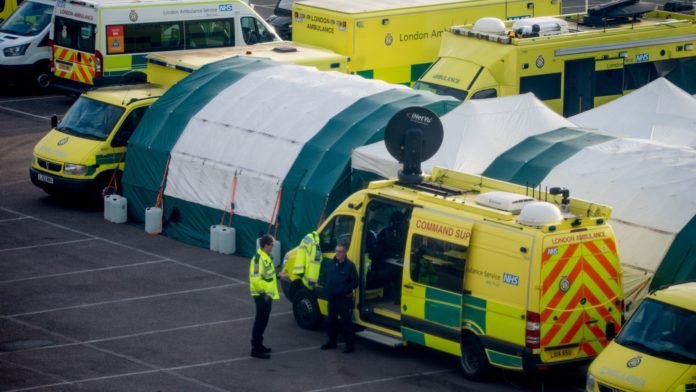 Globally the coronavirus pandemic is proving to be a double-edged sword for the games industry.

Despite the potential availability of more players due to people staying at home because of COVID-19 social distancing measures, remote working and a looming recession are bringing significant challenges.

The industry’s headline events, including the E3 games exhibition in Las Vegas, have also been cancelled leaving development studios without a major platform to debut new titles.

Even though the industry’s work is almost all digital, the collaborative nature of development is hampering productivity due to remote working.

Dr Richard Wilson, the chief executive of independent games industry trade association TIGA, told Sky News he had spoken to one company which said productivity had dropped up to 20% because of the challenges in bringing teams together.

Wider economic difficulties are being felt here too.

Smaller studios often commissioned to build tailored games are finding these commissions are drying up – while for medium-sized firms, venture capital finance is becoming completely inaccessible.

Dr Wilson said: “Two thirds of UK games studios employ are micro businesses employing four or fewer people with limited financial resources. As such, they are highly vulnerable to a fall in demand, orders and projects.”

Mobile games developers which are dependent on advertising revenues are finding themselves hit by the economic downturn.

Despite an increase in players, businesses are simply cutting back on their advertising spend.

But for those parts of the industry which have products on hand to face consumers, the outbreak has definitely brought a surge.

As Dr Wilson noted, PC gaming platform Steam is busier than ever before. On average it is currently being used by more than eight million more concurrent players now than before social distancing guidelines came into effect in March.

Dr Wilson told Sky News that the feeling he had from speaking to around 20 companies on Wednesday morning was that sales and player numbers were definitely up.

According to the government, there are approximately 37 million people in the UK who play video games, and there are more than 2,200 active video game companies in the UK.

A number of British companies, including Activision Blizzard King, behind Candy Crush Sage, are inserting “Stay at Home” messaging in their mobile games to reinforce social distancing instructions.

Culture Secretary Oliver Dowden said: “It is absolutely vital that we all follow the simple government advice to stay at home, protect the NHS and save lives.

“I’m delighted to see the UK’s brilliant video games industry stepping up to strongly reinforce this message to gamers across the UK.”

Dr Jo Twist, the chief executive of trade body Ukie, said: “Games are played by tens of millions of people across the UK and we know they can play an important role in bringing people together at this challenging time.”

In addition to sharing public health message, the industry in the UK has “supported the creation of home school computing lessons through Digital Schoolhouse,” Dr Twist added.

Dr Wilson suggested the government could help the industry, which “generates an estimated £747m in direct and indirect tax revenues to the Exchequer, employs 14,500 full-time highly skilled development staff and is export focused”, by increasing Video Games Tax Relief and fast-tracking claims.

He added that “many businesses, including games firms, face having empty premises for the foreseeable future because their teams are all working remotely” and the government should consider relieving the cost of rent”.

“Thirdly, the government should consider the introduction of a Games Investment Fund, which would provide pound for pound matched funding, up to a maximum of £500,000 for original game projects.”

Baltimore May Soon Ban Face Recognition for Everyone but Cops

“Keeping Up With the Kardashians’ reunion: What we learned from Part I

Baltimore May Soon Ban Face Recognition for Everyone but Cops

Murray wants ‘more matches’ as he strives to improve