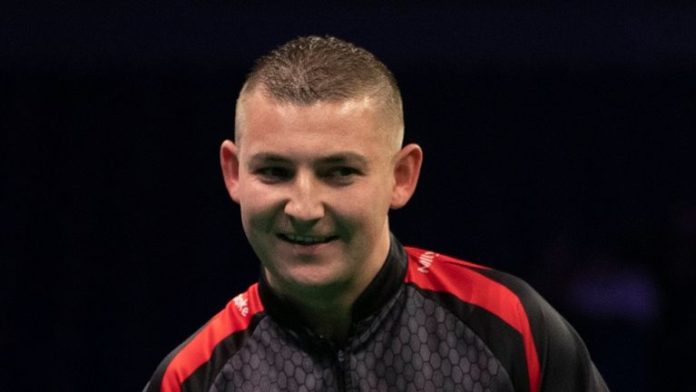 In theory, all you need is a board, three darts and maybe a calculator, so it’s no surprise to see darts leading the way when it comes to bringing fans live sport during the coronavirus pandemic.

Forget working from home, playing from home has been the mantra in darts as technology is allowing head-to-head matches, charity face-offs and as close to live action as many sports have managed.

It’s not just restricted to darts players either. Wayne Bridge and Sky Sports’ Jamie Redknapp duked it out for charity while Open champion Shane Lowry and Ryder Cup star Ian Poulter took to Instagram Live for their own match-up.

It’s fair to say ability levels are mixed, but that is the joy of darts, anyone can play. All of the major manufacturers are reporting a boon amidst all the uncertainty as the sales of boards, darts and equipment ensure the amateur scene is thriving.

People at home are taking to their very own oche for the first time to start their journey or perfect their game, while DartConnect, the darts scoring platform and online play network for professional, amateur and friendly leagues has reported a surge in the number of people using their app.

“HAVE A BIT OF THAT LAD”

Dobey finishes a successful night with a 4-2 victory over Matthew Edgar! pic.twitter.com/49azkQvGRQ

This would be amazing….. CHAMPIONS OF CHAMPIONS NIGHT…WALKONS the whole shebang as @Wayne501Mardle would say https://t.co/2psmrzH44d

Last week the PDC launched darts from home with five players battling it out in a mini league of 10 matches. Devon Petersen prevailed over Chris Dobey, Luke Humphries, Ted Evetts and Matthew Edgar and there’s even been talk of a Champion of Champions edition as the event continues.

Nathan Aspinall, Steve Beaton, Jelle Klaasen and Stephen Bunting are next in line when they take to their home oches for a virtual contest to see who joins Petersen in claiming the ‘darts from home’ honours.

“We’ve been doing the best with what we can do – it’s nice to send a bit of time at home with the family,” Aspinall told Sky Sports News ahead of Wednesday’s showdown.

“It’s via webcam and I think that we’ve got Dan Dawson doing the scoring and the commentary and we’ll be joining from our homes.

“We’re going to play the best of seven or nine, a league and it’s a bit of fun for the fans. I’m sure that everyone is missing their darts as much as we are, so it’s giving the fans a little something to watch during this difficult time.”

During the current sporting hiatus, one of the biggest rivalries in tungsten will resume this week as Taylor and Barneveld fight it out on an updated version of electronic dartboard Nexus, and even the thought has The Power relishing the prospect of a showdown with his great rival.

“Even when I play exhibition matches against Barney, I get excited, I get nervous – it’s very weird,” Taylor told the Darts Show podcast.

“I can’t wait to play him again. He is a good friend now but we were never really friends before – we were associates who would nod – but now we get on loads better.”

However, those are just the headline acts in a sport seeking to be creative; from the stars of today and legends of the sport going head to head, through to initiatives from the Junior Darts Corporation giving the stars of tomorrow their chance to practise with easier access to their online tutorials.

The sport is also doing its bit for the wider communities. None more so than world No 5 Michael Smith who has been applauded for keeping his practice routine intact with the added appeal of playing the public, who are donating to charity for the right to face Bully Boy and his talented son, who is taking over the occasional throw too.

It’s not just the big names, darts is a sport that is easy for people to play and being stuck at home in lockdown seems to have been a catalyst across the globe. With sales soaring, the rapidly growing DartConnect has seen a surge in online play.

The scoring platform was initially set up as a network to play friends and darts teammates by American David Macher. He told Sky Sports that the current situation has seen the networking element of the platform’s reach once again to the fore over its burgeoning role as a scoring partner.

“The foundation was how to play online and when we launched we were a bit ahead of our time, because not than many people engaged with it,” he said.

“When people saw our format they wanted to use it for their leagues and their tournaments so we sort of left our roots and began working with Championship Darts [North America’s only professional steel-tip Tour] and the PDC – that had become our main focus.

“It was much more popular with people using it in person but now that has changed and we are back to our roots.”

Average weekly numbers on the platform, which is also used by the PDC as its official scoring mechanism on the Pro Tour, are up from an approximate average of 6m darts thrown per week to a record 8.3m for last week’s action.

“We initially saw a drop as there was so much uncertainty and leagues were suspending their seasons with tournaments and competitions were being rescheduled but now our volume is higher than ever.

“It takes a certain amount to support a match in the pub or in a league, but playing online requires a different capability that was initially intimidating.”

Typically they are not the sort of numbers that are tracked by the platform, but now the focus has shifted back to supporting that thanks to a huge increase in demand for playing online with teammates, friends, neighbours or family.

A Facebook group has doubled in size as people seek matches beyond those familiar faces.

“In the first week of February, when league and tournaments have really picked up for the year, online play was about 1 per cent of our volume and now that is close to 50 per cent,” Macher added.

“We are having around 1500 people register with us every week and typically we are at about half of that.”

Most of March, all of April and almost certainly May have been wiped off the darting calendar as both the professional and amateur circuit join the rest of the world in suspending play.

Where possible the PDC have sought to keep as many of their events and tournaments in place with July onwards looking particularly busy.

But the sport is finding a new level of popularity at the moment as people reconnect with it and its best players keep themselves in tune ahead of the hopeful resumption.

Whether it’s fans watching the game’s current stars and iconic figures compete in unfamiliar surroundings, or themselves playing against their favourites in aid of the NHS, darts is ensuring it is keeping people occupied and entertained during these unknown and unforeseen times.