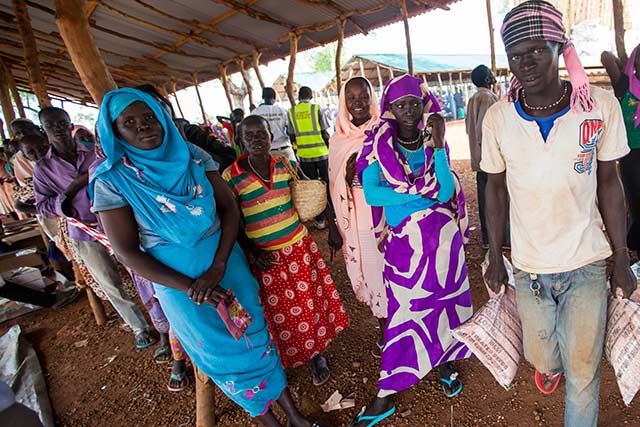 The ongoing crisis in South Sudan is aggravating an already fragile socio‐economic context, in which many households are at risk of food insecurity and malnutrition both in rural and urban centers, including in the capital Juba. The South Sudan IPC update for April 2016 estimated that 4.8 million people (40% of the total population) would face severe food insecurity countrywide in the May‐July 2016  lean season period. A high proportion of the food insecure are from the states of  Unity, Northern Bahr el Ghazal, Western Bahr el Ghazal, Upper Nile and Warrap. The macro-economic downturn occasioned by the protracted crisis and the decline in oil revenues, combined with below‐average harvests in 2015 led to a further increase of food prices and a contraction of  income-generating opportunities, hence constraining physical and economic access to food for South  Sudan’s  poor population, estimated at 60% of the total population as of 2015.

About 360,000 of the estimated food insecure population are the urban poor in Juba, Wau, and Aweil towns, who are most affected by the economic crisis, diminished livelihood opportunities, and high cost of food. In Central Equatoria, approximately 20% of the population was estimated to be facing severe food insecurity from May to July, the majority of whom are the Juba urban poor. This number is expected to go up following the recent fighting in Juba.

The deterioration of the nutrition situation across South Sudan is equally worrying. The South Sudan Global Acute Malnutrition (GAM) shot up drastically from 13% in November/December 2015 to 17.9% in May/June 2016. Seven out of ten states have GAM above the WHO 15% emergency threshold. The GAM in worst-affected two states is above or close to 30%; GAM in Northern Bahr el Ghazal is 33.3% and 26.2% in Unity. The worsening food security situation, high morbidity due to fever, and conflict-related population displacements may further fuel a deteriorating nutrition situation as the above factors disrupt efforts to treat and prevent acute malnutrition.

Results of recent conflict in Juba

Juba is an important commercial and humanitarian logistical hub and recent fighting has resulted in disruptions to key infrastructure that supports livelihoods, destruction of some key markets, and displacement of populations in Juba, with ripple effects across the neighbouring counties.

At the height of the recent conflict in Juba, an estimated 36 000 people were displaced, and currently an estimated 15,000 remain displaced without adequate shelter, food, water, or sanitation and hygiene facilities. People that fled their homes in Juba have lost both domestic and productive assets to looting. Livelihoods based on casual labour and petty trade have also been severely  affected, further exacerbating the food insecurity situation among the urban poor in Juba.

Already dysfunctional markets in Juba have been disrupted further through the looting  of shops and market stalls. Trade in Juba and the neighbouring counties relies on the Nimule–Juba  highway for  the importation of food commodities and current insecurity along the road is severely affecting the ability of traders to supply markets sufficiently in order to meet food demands. Traders in the most conflict-affected markets have lost their stock and capacity to re-stock, with many foreign  traders opting to leave for security reasons. As a consequence of the fighting, immediately after the  ceasefire was declared, prices of basic commodities in Juba rose by as high as 45‐80% for legumes, 12‐58% for cereals and 70-80% for fuel. The local currency lost further ground to the US dollar (depreciated by 43%) in the aftermath of the conflict, exchanging at SSP 60/1 US dollar down from SSP 48/1 US dollar a week earlier. South Sudan currently has an inflation rate of over 300% – the highest in the world and a historical high since the country rebased the CPI basket in June 2011.

The capacity of humanitarian agencies to respond to the deteriorating food and nutrition security situation has been further compromised by the looting of agencies’ warehouses and insecurity-related staff reductions. This comes as an additional constraint to the inadequate funding which was constraining the humanitarian response in 2016, and alongside low operational capacity and logistical challenges in addressing the growing food and nutritional needs of the vulnerable population. Due to the latest events, international staff evacuation is reducing the UN and NGOs operational capacity and humanitarian air operations for the delivery of assistance to vulnerable populations across the country are expected to scale down in the face of the fluctuating security situation and airport closures.

It is feared that if insecurity spreads to the other parts of the country, the national food security situation will further deteriorate from the current estimated 4.8 million people as a result of disruptions to agricultural production, and livestock and fisheries activities. The reduced capacity of humanitarian organizations to respond  to increasing needs, especially if combined with limited accessibility, will further constrain food access for vulnerable.

In the prevailing negative outlook, the only positive mitigating factor is the current cropping season that is benefiting  from an average to above average rainy season and timely and widespread  coverage of crop input distributions across most agricultural areas in the country. The upcoming green harvest in August and main harvest in November‐December, is expected to mitigate food shortages across the country as well as provide reprieve from high market prices as local produce  finds its way into the markets. The rainy season has also resulted in the availability of wild foods, fish and livestock products for most rural populations.

However, any deterioration of an already fragile and tense security situation is likely to restrict access to fishing grounds, farms for crop planting and harvesting, and will push livestock herders into unseasonal migration patterns towards areas that are normally intended for crop production. All these, if unchecked, will lead to a further deterioration of the already fragile food security situation.

The food security and nutrition partners are greatly concerned that disruptions as a result of the recent conflict are escalating an already severe food and nutrition security situation in Juba, particularly among the urban poor. There is an urgent need for the Government to immediately  provide and guarantee security in Juba and the neighbouring counties to ensure the smooth flow of goods and services to populations in need, especially the market‐dependent poor, in order to prevent any further deterioration of the dire food security and malnutrition situation. The Government needs to scale up efforts to ensure a sustainably secure environment in the whole  country in order to facilitate the successful conclusion of the current cropping  season which is expected  to improve food security and nutrition as households will rely more on their farm produce and less on markets. Local production also assists urban populations as it replenishes market stocks at a lower cost, slightly easing high food prices. Millions of people already severely food insecure will be impacted if the conflict spreads beyond Juba. Also, it is vital that the Government assures the  security and safety of humanitarian agencies, their assets and staff, and allow unrestricted access so  that ongoing operations can continue to deliver assistance to the increasingly vulnerable populations.

As a result of the recent developments, food security and nutrition partners are advocating for continued investment in data collection and analysis to inform decision-¬making despite the security and operational constraints. Also the need to monitor at-risk areas – namely Unity and Bahr el Ghazal states that are currently in IPC Phase 4 (Emergency) – is vital.

Red Cross Red Crescent: We need new extraordinary steps to increase access to COVID-19 vaccines and we need them now