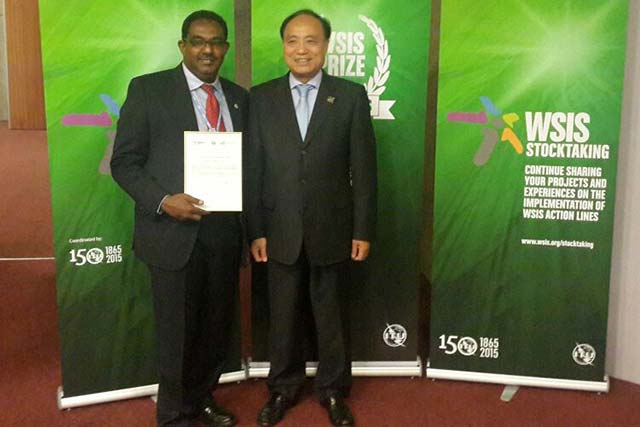 This international recognition is putting FAO on the scene once more. It is not the first time that FAO works is recognized. Already in 2012, FAO was awarded WSIS Project Prise for its community of practice e-Agriculture. In 2016, the award from the World Summit on the Information Society (WSIS) goes to FAO fieldwork. It is a clear indication of the importance and leading the work that SWALIM has brought to the development of water and land management capacity in Somalia following years of civil strife and weak or non-existing government institutions.

During the week of 2-6 May, Hussein Gadain, SWALIM coordinator  was in Geneva, Switzerland, to receive the coveted WSIS award as a “Champion” in the category of “e-Agriculture”. The Somali Water and Land Information Management project (SWALIM), initiated in 2001, is now approaching the end of its fifth phase (February 2013 to January 2017), which has focused on improved information outreach, wider dissemination and access, and intensified capacity development among partners and the stakeholder community.

“The ICT tools developed by FAO Somalia Water and Land Information Management System (SWALIM) have helped vulnerable Somali communities along the Juba and Shabelle rivers to prepare for and respond to floods in a timely manner.  Despite the destruction of infrastructure, the private sector led communication companies supported the initiative and provided continuous information supply to vulnerable farmers. The cost of sharing information was very minimal and this makes the technology affordable and transferable to other parts of the world with similar context.” Hussein Gadain

Among the new features on the SWALIM web site are the updated Flood Risk and Response Management Information System (FRRMIS), and the dynamic “Live Map” platform, which presents complex data sets on an easy-to-understand map interface. The Live Map system is currently being expanded to include data on soils and land degradation, infrastructure interventions and other important information for decision makers.

In anticipation of the effects of heavy El Niño rains in late 2015, SWALIM developed an SMS-based mobile phone application to capture information about impending flood situations and to warn vulnerable communities along the Juba and Shabelle rivers. This system, known as FRISC/Digniin (from the Somali word for “warning”), was also used to alert fishing vessels and coastal communities about two cyclones that swept across thenorthern coast of Puntland in December, saving lives and averting severe property damage.

The FRISK/Digniin system is now being adapted and expanded to gather rainfall data throughout Somaliland and Puntland, as well as the central and southern areas of the country. The rainfall data, like the river level information, is being fed directly into the on-line FRRMIS system to provide near-real-time updates on potential floods and inundations.

The WSIS Forum in 2016 represents the world’s largest annual gathering of the “ICT for development” community. The Forum is co-organized by ITU, UNESCO, UNDP and UNCTAD, in close collaboration with all WSIS Action Line Facilitators/Co-Facilitators (UNDESA, FAO, UNEP, WHO, UN Women, WIPO, WFP, ILO, WMO, UN, ITC, UPU, UNODC, and UN Regional Commissions). Further information on the WSIS and its activities can be found here.