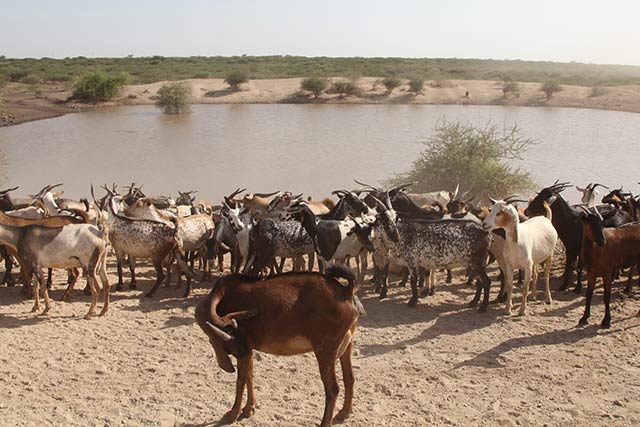 The belg (spring) rains have arrived in Ethiopia but the effects of more than two years of persistent dry spells and poor rainfall continue to threaten local livelihoods. Pastoralists, in particular, will need an estimated two to four years to recover from the staggering livestock losses and food insecurity which escalated in 2015.

Nowhere is this clearer than in Afar, a largely arid to semi-arid region bordering Eritrea and Djibouti. In early June 2016, a Nordic delegation comprised of representatives from the embassies of Denmark, Finland, Norway and Sweden visited the region – one of Ethiopia’s most livestock-dependent and drought-prone.

Embassy officials toured resilience-building fodder production activities operated by the regional government in Semera, Afar’s capital. The three day visit also included high-level meetings with government officials. Amadou Allahoury, FAO Ethiopia Representative, remarked on the success of the group mission, the first of its kind in recent memory. “We are enthused by the interest our Nordic partners continue to show in this region, particularly in the areas of food and nutrition security,’ he said. Allahoury also noted that the region was sometimes overlooked for humanitarian interventions, despite the crushing needs. “The scale of Afar’s needs are huge, households have been hit by the El Niño drought crisis and lately, belg season floods,” said Allahoury.

All 32 districts in the region have been classified as ‘priority one’ in a government-established hotspot classification which tracks, among other things, food and nutrition insecurity, sanitation and health. Since March 2016, flash floods and heavy storms have inundated pasture and farmland in the region, an estimated 55 000 hectares nationally. The belg season floods resulted in more than 90 deaths and Ethiopia continues to grapple with the enormous property damage and animal losses caused by the rains. The National Flood Taskforce predicts that at least 485 000 people will be affected by flooding.

The season has, however, improved access to water, reducing the need for wide-scale trucking. Pasture, too, is returning and lands almost completely desiccated, are now providing improved fodder for the millions of livestock who forage across Afar. Deressa Ali, Deputy Head of the Afar Pastoral Agricultural Development Bureau, affirmed his government’s commitment to a strong partnership with FAO to strengthen livestock-based livelihoods. “FAO is our closest development partner in this region and we hold a mutual understanding and vision for the livestock sector and pastoralists,” he said.

Well over 90 percent of citizens rely on pastoralism as their main income source. The remaining 10 percent are engaged in agropastoralism– a mix of farming and animal rearing– as well as other activities. The centuries-old clan system is firmly practiced here, and investments – which typically take the form of livestock such as small ruminants, cattle and camels – are owned by large family units. The El Niño-induced drought crisis weakened the body condition of these animals, severely impacted milk production and worsened the terms of trade for pastoralists in the region.

Speaking on behalf of the Nordic group, second secretary at the Royal Norwegian Embassy, Maja Hennig Kjennerud, emphasized the importance of supporting the region through strong bilateral ties. Kjennerud also commended the regional government’s efforts to combat the crisis. “The effects of the drought are large but we have seen a number of positive initiatives here, I will strongly recommend that we continue to strengthen our support,” said Kjennerud.

Since 2004, the Kingdom of Norway has enabled FAO to implement a number of livelihood protection and improvement interventions in Afar region. These include, but are not limited to, livestock feed distribution, animal health service strengthening and livelihood diversification. Norway also financed the rehabilitation of water points in the region, leading to increased levels of resilience among pastoralist households during the long dry spells that characterized much of 2015 and 2016.

However, response activities such as animal health interventions remain critical, and strategic actions in the livestock sector are essential if pastoralist livelihoods in Afar and other regions are to fully recover. Notably, the spectre of La Niña episode looms and meteorological experts predict even more flooding in late 2016.

FAO is appealing for USD 7.8 million to provide urgent supplementary feeding, support forage development, rehabilitate water points and administer animal health services across the country. USD 30 million is urgently required in order to support the livestock sector, according to the federal government.

The ongoing belg season assessment being led by the Government of Ethiopia with the support of FAO will lead to a revision of the livestock sector’s needs. FAO has mobilized a large ground team to enhance technical activities and the results of this assessment will be published in early July 2016.