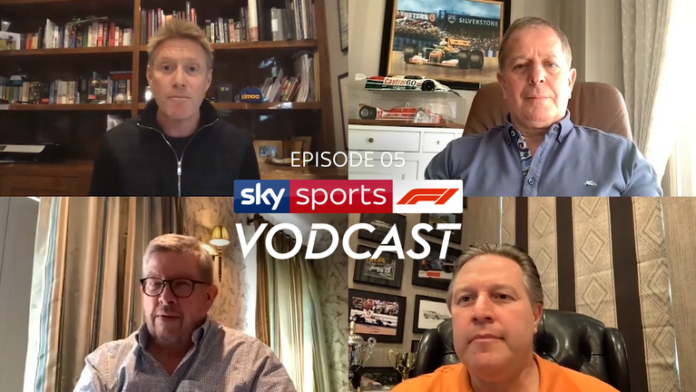 Ross Brawn and Zak Brown covered a range of topics on the latest Sky F1 Vodcast – from why 2020 could start behind closed doors, to McLaren’s cost-cap desire. But what about the bits you may have missed?

We’ve got you covered. As well as watching the full episode (above) and reading our two pieces (below), catch up with what Brawn and Brown had to say when they joined Martin Brundle and Simon Lazenby here.

Brawn, F1’s managing director of motorsports, said on the Vodcast that he’s still optimistic of a July start – but also revealed that the latest the season could get going is October.

“Eight races would be the minimum [for the championship], and we could achieve eight races by starting in October,” said Brawn. “If you wanted a drop-dead point (deadline), it would be October.”

F1 could also race into early 2020, even though that’s not ideal.

“There’s always the possibility we could run into next year,” he continued. “That’s being explored and we could stray into January to finish the season, though there are all sorts of complications with that.

“The choice this year is anything between eight and 19.”

Brawn also gave an update on whether the Grand Prix structure could change, with a more intense racing schedule leading to calls for just a Saturday-Sunday event, rather than the usual three days.

“We may have some two-day races in order to meet the logistical need,” said Brawn. “For instance China will probably be a two-day race if we go ahead with it. The FIA and all the teams have got every permutation covered.”

He added that street races, like Singapore, are “difficult to move” from their previous calendar slot, but other tracks could host GPs without much notice.

“Where a race track exists, probably within a month you could hold a race. Particularly if it’s a closed race, because you’re not talking about marketing and selling tickets.

“Looking around those the schedules, there’s some races in odd times but they would still be OK from a weather perspective.”

Red Bull and Ferrari ‘playing with fire’ regarding cost-cap

Brown said McLaren are fully behind a reduced cost-cap, which F1 hope all its teams get behind. The cap is currently set at $175m (£141m) a year for teams, but Brown wants it significantly reduced, to around $130m.

However, two teams, which Brown all-but-admitted were Red Bull and Ferrari, are not in favour of that. The McLaren boss said they were “playing with fire” as certain outfits may not survive without a reduced budget cap.

“Without 10 teams or at least nine teams you don’t really have Formula 1. So I think these, it’s really a couple of teams, need to be very careful because I think they’re playing with fire. It takes a full grid to have a sport.”

He added: “I think they need to be confident in their capabilities. In sport you kind of want to think everyone can fight fairly, and may the best team win.

“It’s like a heavyweight only trying to fight middleweights. These are great teams, they should be prepared to fight everyone on more equal terms.”

Why F1 has avoided ‘handicap system’

Brawn also spoke at length about the need for a cost-cap, and explained why F1 don’t simply give the teams who are winning a handicap.

“We’ve got to maintain intergrity,” he said. “The easiest thing for us to do would be to introduce handicap systems. If you’re winning you carry extra weight, or you have some other handicap.

“We’ve always avoided that because I think true competition is vital.”

McLaren would withdraw again if necessary

Back in Australia, McLaren were arguably the domino falling which led to the Grand Prix being called off as they pulled out of the event when a team member contracted coronavirus.

Brown said he would do the same thing if in similar circumstances when F1 does get racing again.

If we were not able to race I would do exactly what I did in Australia and withdraw the team,” he stated. “You’ve got to put the safety of your team first.

“But if ultimately Formula 1 and the teams felt comfortable that the issue that we had was contained in just our garage and they felt it was safe to go racing, I would not stand in the way.

“It would be unfortunate. Maybe we could have a discussion with F1 and go back to the good old days where you could drop a couple of races. Let’s say we get back to 15 races, 13 races count so if we had something like that we’re not holding back the sport but we’re also not being penalised.”