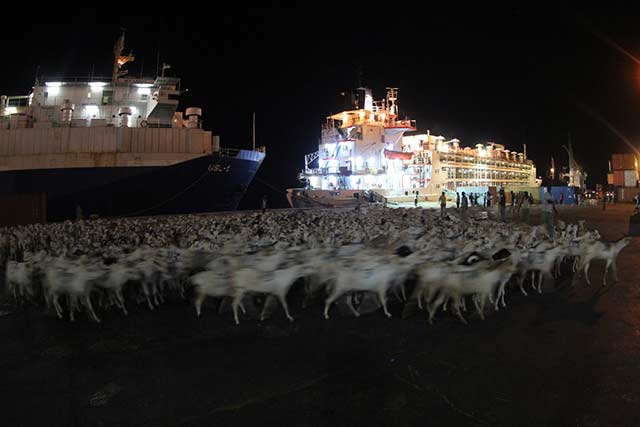 FAO scales up support for country’s leading foreign earner. Export of live animals to Gulf nations continued to be Somalia’s leading foreign exchange earner in 2015, registering steady annual growth with a 6 percent increase, according to latest data by the UN’s Food and Agriculture Organization (FAO).

“Obviously we are delighted by these figures” says Said Hussein Iid, Somalia’s Minister of Livestock, Forestry and Range. “But there is still so much more to be done to grow this sector, both domestically and in terms of exports” the Minister continues. “We need to diversity into new markets, make sure that livestock have good year round access to high quality fodder and continue to build a national system for managing animal health across the whole of Somalia” said Iid. Last year, more than 2,600 Somali camels were sold to Egypt, the first time since the outbreak of conflict in Somalia some 25 years ago.

“Somalia saw increased demand in 2015 for lives animals in the Gulf mainly due to increased investment in animal health services by FAO and other organizations, which is key condition imposed by the importing countries,” said Khalid Saeed the head of FAO’s livestock sector in Somalia. Saudi Arabia continued to be a key market for Somali livestock and future expansion of the Hajj, when Muslims slaughter animals to celebrate Eid Al-Adha, or the “Feast of Sacrifice”, means good business for Somalia.

Previous health concerns led to an economically crippling 9-year export ban on Somali livestock in 2000. To avoid such occurrences, FAO has dedicated technical and financial resources to ensure that Somalia’s livestock sector regains it’s past glossy as a major player in the global livestock industry.

“In our current strategy and action plan, FAO will continue to invest in animal health, livestock by-products and infrastructure such as slaughterhouses, meat markets as a way of putting money in people’s pockets and food on the table,” said Richard Trenchard, FAO’s Country Representative for Somalia.

Livestock in most parts of Somalia are sold by visual appraisal. Sheep or goats of local breeds weighing about 35-40 kg can be sold at an equivalent price of USD 50. Borana breed cattle, with an average body weight of 300 kg, is sold at about USD 300. Camels weighing 300 kg are sold at about $700 per head. Analysis of these average farm-gate prices indicates that Somali livestock producers could have earned more than USD 380 million in 2015 from animal exports.

“This goes to show that livestock is the ‘real deal’, if we are to help Somali communities gain resilience against frequent shocks. By helping save a herder’s camels from devastating droughts and killer diseases, we actually offer some form of insurance of thousands of dollars worth of livestock assets,” said Trenchard.

FAO’s successful interventions in 2015 were possible thanks to generous support from United States Agency for International Development (USAID), United Kingdom (UKAID), the Common Humanitarian Fund (CHF) and the Central Emergency Response Fund (CERF). In order to continue these interventions across Somalia, FAO is seeking USD 15 million for 2016. Of that, only USD 3 million has been received.

“FAO’s continued work in Somalia’s livestock sector has got a direct bearing on the success of the entire industry. That is why we are appealing to donors to help us continue with this great work,’ said Trenchard.

FAO has also launched Rapid Results Drought Response Plan is a time-sensitive call for funds to respond to the current drought in Somaliland and Puntland. The USD 17 million-appeals responds to the most pressing food security and livelihood needs of people severely affected by poor rains and drought conditions in parts of Somaliland and Puntland. The Plan focuses on short-term tangible results that need to be delivered for families to preserve their sources of food and livelihoods: quick economic gains, improved water access, livestock preservation and a harvest in 2016.

“Livestock owners in the worst drought-affected areas are in desperate need of support. Animals have been weakened by months of drought and poor pastures. Prices are starting to fall. We need to keep these animals healthy and disease-free. If not, prices could fall well below normal seasonal averages, causing enormous problems today and holding back growth tomorrow. We must act now. We must act urgently. If not, we risk canceling the progress that has been made” concludes Iid, Somalia’s Livestock minister.