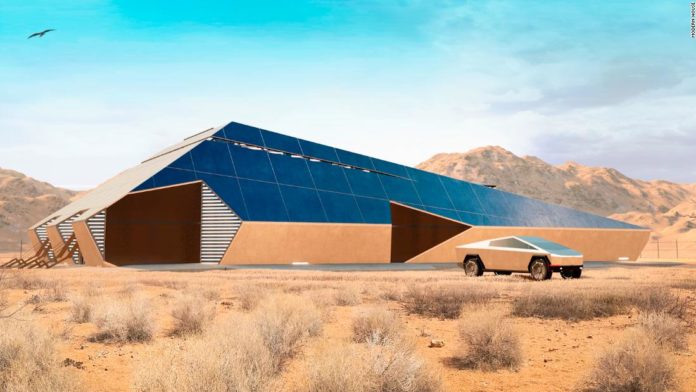 When Tesla’s Cybertruck was unveiled by Elon Musk late last year, the futuristic vehicle was compared to something out of an apocalyptic sci-fi movie.

And now, a Russian architecture firm has designed a zombie-proof bunker to match.

Dubbed CyberHouse, the multi-story structure was devised to withstand disasters such as hurricanes, earthquakes or radioactive contamination. The firm behind the proposal, Saint Petersburg-based architects Modern House, claims the building could also protect inhabitants from a zombie apocalypse — as the undead would be unable to scale its sloped walls or penetrate its air-locked doors.

The architecture firm behind the project, Modern House, was inspired by Tesla’s Cybertruck. Credit: Modern House

A series of graphic visualizations for the bunker depict Tesla’s divisive Cybertruck parked outside. The concept design mirrors the vehicle’s distinctive angular shape and metallic appearance, complete with inside parking space for the almost 20-foot-long truck.

A press release for the 984-square-foot project claims that it could comfortably house up to seven people in the case of disaster. The firm’s lead architect Alex Wizhevsky said he was inspired by both Tesla’s design and that of submarines, with his proposal centered around a reinforced concrete core.

“In developing the CyberHouse, we took as a basis the principle of building modern nuclear submarines, consisting of several … protective shells,” Wizhevsky explained via email. “The multi-layered enclosure proposed in our project provides maximum safety from various disasters.”

The design features ample parking space for large vehicles, such as a Cybertruck. Credit: Modern House

Systems for treating and purifying water and air would aid survival if supplies were cut off. Described as “completely autonomous,” the house would also be powered by solar panels and wind turbines, meaning that inhabitants could live there for up to a year without leaving, Wizhevsky said.

Naturally, the inclusion of an outdoor terrace for sunbathing makes the CyberHouse a luxurious choice for the discerning Tesla owner — and the structure can be engineered to contain a small swimming pool, should the occupant so desire.

“I focused not only on maximum safety, but also on comfortable autonomous living in this house,” Wizhevsky said. “Indeed, for (certain) potential owners there is no serious need for protection; most likely they will simply like the design and autonomy of this project.”

While there are no immediate plans to build a CyberHouse, the architect expressed confidence that his vision will soon become a reality. He reported interest from several “potential clients” in Russia, Spain and the US. And rather than a futuristic novelty, Wizhevsky believes his bunker offers a realistic look at how our aesthetic tastes will evolve.

“World architecture, and now the automotive industry, is moving towards simplification of forms, maximum utilitarianism and manufacturability,” he said, adding that new technologies “give hope to lovers of this style …. that it will grow into mass culture in the near future.”

Tesla’s Cybertruck spawned online buzz, controversy and countless memes when it was unveiled last year. Despite the mixed reaction, Elon Musk tweeted three days later that 146,000 of the vehicles had already been pre-ordered, with a later post suggesting this number had risen to 250,000.

A rooftop terrace offers a touch of luxury to the bunker’s inhabitants. Credit: Modern House

Upon its release, the Cybertruck was compared to vehicles seen in movies like “Blade Runner,” while the official Twitter account for “The Walking Dead” wrote that the truck “would be sick in a zombie apocalypse.”
And Wizhevsky isn’t the only designer inspired by Tesla’s futuristic pickup truck. New York design agency Lars Büro recently proposed a prefabricated steel unit, dubbed Cybunker, that would contain a 600-square-feet parking space for “trucks that don’t fit in standard garages.”

A series of digital renderings of the bunker depict the Cybertruck — which goes into production next year — parked inside the unit, with the rest of the interior used for residential, commercial or storage purposes.

This article has been updated to reflect that Modern House is based in Saint Petersburg.