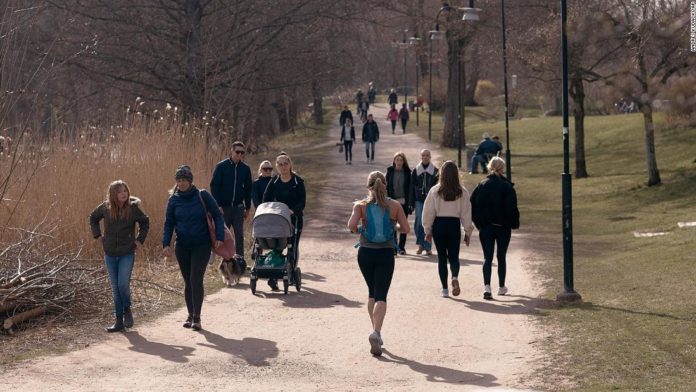 But not Sweden. Restaurants and bars are open in the Nordic country, playgrounds and schools too, and the government is relying on voluntary action to stem the spread of Covid-19.
It’s a controversial approach, and one that’s drawn US President Donald Trump’s attention. “Sweden did that, the herd, they call it the herd. Sweden’s suffering very, very badly,” Trump said on Tuesday.
But the Swedish government is confident its policy can work. Foreign Minister Ann Linde told Swedish TV on Wednesday that Trump was “factually wrong” to suggest that Sweden was following the “herd immunity” theory — of letting enough people catch the virus while protecting the vulnerable, meaning a country’s population builds up immunity against the disease.
Sweden’s strategy, she said, was: “No lockdown and we rely very much on people taking responsibility themselves.”
The country’s state epidemiologist, Anders Tegnell, also pushed back against Trump’s criticism that Sweden was doing badly. “I think Sweden is doing okay,” he told CNN affiliate Expressen. “It’s producing quality results the same way it’s always done. So far Swedish health care is handling this pandemic in a fantastic way.”
As of April 9, Sweden has 9,141 cases of the Covid-19 virus and 793 deaths, according to Johns Hopkins University figures.
Sweden’s actions are about encouraging and recommending, not compulsion. Two days after Spain imposed a nationwide lockdown on March 14, Swedish authorities were encouraging people to wash hands and stay at home if sick. On March 24, new rules were introduced to avoid crowding at restaurants. But they very much stayed open.
So did many primary and secondary schools. Gatherings of up to 50 people are still permitted.
Tegnell defended the decision to keep schools open. “We know that closing down schools has a lot of effects on health care because a lot of people can’t go to their work anymore. A lot of children are suffering when they can’t go to school.”
Elisabeth Liden, a journalist in Stockholm, told CNN the city is less crowded now. “The subway went from being completely packed to having only a few passengers per car. I get the sense that a vast majority are taking the recommendations of social distancing seriously.”
But she added that while “some Swedes won´t even kiss their spouse, others are throwing Easter parties.”

Much of Sweden’s focus has been to protect the elderly. Anyone aged 70 or older has been told to stay at home and limit their social contact as much as possible. One Swedish government official said that on the whole people supported the government’s approach, but many were “upset about the fact that no ban on visiting homes for elderly was set until recently [April 1], and now the virus is widely spread among these homes, causing the death toll to rise.”
The World Health Organization (WHO) is skeptical of Sweden’s approach. Noting a fresh surge in the country’s infections, the WHO told CNN Wednesday that it’s “imperative” that Sweden “increase measures to control spread of the virus, prepare and increase capacity of the health system to cope, ensure physical distancing and communicate the why and how of all measures to the population.”
“Only an ‘all of society’ approach will work to prevent escalation and turn this situation around,” said a WHO Europe spokesperson.
Sweden’s “curve” — the rate of infections and deaths caused by coronavirus — is certainly steeper than that of many other European countries with stricter measures. A study by Imperial College London estimated that 3.1% of the Swedish population was infected (as of March 28) — compared to 0.41% in Norway and 2.5% in the UK.
As for deaths, by April 8, coronavirus accounted for 67 fatalities per 1 million Swedish citizens, according to the Swedish Health Ministry. Norway had 19 deaths per million, Finland seven per million. The number of deaths rose 16% on Wednesday.
Some Swedish researchers are demanding the government must be stricter. This week several prominent Swedish clinicians wrote an open letter lamenting that large numbers of people are visiting bars, restaurants and shopping malls, even ski slopes. “This unfortunately is translating into a death toll that continues to climb in Sweden.”
Cecilia Söderberg-Nauclér — a virus immunology researcher at Sweden’s Karolinska Institute — is one of more than 2,000 health professionals and researchers who signed a petition demanding tougher action. She told CNN: “We are not winning this battle. It is horrifying.
“Where I live people are working from home, but they go to local restaurants, local cafés and they mix up old people and young people from schools and universities. That is not social distancing.”
Söderberg-Nauclér says the situation in Stockholm, where the great majority of the country’s infections have occurred, is “lost,” but adds: “It is not too late for rest of the country. I wish we would lock down and take control of regions not affected in same way.”

Tom Britton, professor of mathematical statistics at Stockholm University, models how infectious diseases behave in a population. He believes 40% of the Swedish capital’s population will be infected by the end of April. While acknowledging the difficulty of measuring the rate of infection, he told CNN that “my best guess today would be 10% or a bit more” of Swedes currently have the virus nationwide.
Some opponents of the government’s policy fear that reliance on voluntary behavior will cause a much faster spike in cases, potentially overwhelming the health care system. Sweden also has one of the lowest ratios of critical care beds per capita in Europe, and the government official who spoke with CNN said that supplies of protective equipment are only just staying ahead of demand.
In some ways, however, Sweden is better prepared to weather the storm than other countries. Some 40% of the country’s workforce worked from home regularly, even before the virus struck and Sweden has a high ratio of people living on their own, whereas in southern Europe it’s not uncommon to have three generations under one roof.
Emma Grossmith, a British employment lawyer working in Stockholm, says another factor in Sweden’s favor is a generous social welfare net that means people don’t feel obligated to turn up for work if their young child is sick. State support kicks in on day one of absence from work due to a child being sick. “The system here was already well set up to help people to make smarter choices which ultimately benefit the wider population,” she told CNN.
Read more:
But Grossmith notes a big gap between the way Swedes and expatriates view the virus. “There is a native trust in the system amongst those who have grown up with it. In contrast, many of the expat community feel that the strategy has neither been communicated clearly nor robustly challenged in the Swedish press. They are deeply worried.”
The next month will determine whether the Swedish system got it right.
An earlier version of this story included an inaccurate statement about Sweden’s welfare system. This has been corrected.