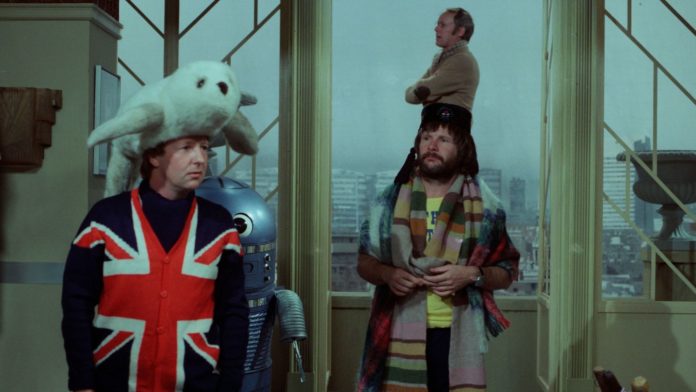 Tim Brooke-Taylor, the comedy star best known for ’70s TV show The Goodies, has died aged 79 after contracting coronavirus, his agent has said.

A fixture in British comedy, his career took in radio, television, film and theatre over more than half a century.

In a statement, his representative said: “It is with great sadness that we announce Tim’s death early today from COVID-19.

“We will remember him for so much but must just mention The Goodies and I’m Sorry I Haven’t A Clue.

“He had, of course, many fans whom he always treated cheerfully even after long and exhausting rehearsals and recordings.

“He was an exceptional client and a pleasure to represent.”

Just heard the devastating news of the death of Tim Brooke-Taylor. A hero for as long as I can remember, and –on a few golden occasions – a colleague and collaborator on I’m Sorry I Haven’t A Clue. Gentle, kind, funny, wise, warm, but piercingly witty when he chose to be. So sad

Fellow Goodie Graeme Garden said: “I am terribly saddened by the loss of a dear colleague and close friend of over 50 years.

“Tim and I met at Cambridge University in the early 1960s and have enjoyed working together almost constantly from that time onwards, on radio, stage, and TV.

“He was a funny, sociable, generous man who was a delight to work with. Audiences found him not only hilarious but also adorable.

“His loss at this dreadful time is particularly hard to bear, and my thoughts are with Christine, Ben, Edward and their families.”

He was a regular panellist on BBC Radio 4’s I’m Sorry I Haven’t A Clue for over 40 years, often alongside Graeme Garden.

Current host Jack Dee said: “It has come as devastating news to hear that Tim has succumbed to this dreadful virus – especially when we all thought he was recovering.

“Tim was a delightful man and never anything but great company.”

Sioned Wiliam, Radio 4’s commissioning editor for comedy, added: “He was charming, quick witted and a hugely skilful comic” who will, she said “be sorely missed by all at Radio 4.”

After starting his performing career in the famed Footlights group at Cambridge University, he moved onto radio with I’m Sorry, I’ll Read That Again.

His break into TV came in 1967 in At Last The 1948 Show, where he starred alongside future Monty Python members John Cleese and Graham Chapman.

The comedian found worldwide fame as part of The Goodies, an anarchic TV comedy which ran from 1970 to 1982, alongside Graeme Garden and Bill Oddie.

The programme, set in a flat shared by the trio, drew audiences of millions of viewers in its heyday, making them household names in the UK, as well as Australia and New Zealand.

Often compared to groundbreaking post-war radio comedy The Goon Show, The Goodies, written and performed by the trio, was massively popular in its time.

I was obsessed with ‘The Goodies’ as a child, the first comedy show I really loved. I queued up to get the Goodies’ autographs as a grown-up, and got to meet Tim Brooke-Taylor more recently at a party. I was in total awe, but he was so kind & generous. It is so sad he is gone. pic.twitter.com/wxyGpJoyIU

The show was a wild mixture of surreal sketches and sitcom, with the odd song and touch of satire thrown in.

Its wit appealed to adults, while its visual humour, such as a memorable episode that featured a giant kitten toppling the Post Office tower, drew in children.

So sad to hear that the great Tim Brooke Taylor has died. A wonderful man, so many happy times sat next to him on I’m Sorry I Haven’t A Clue. Here we are with Barry, Colin and Graeme at a celebration of the show in January. He was on great form. My thoughts are with his family. pic.twitter.com/9CfottzJVe

Brooke-Taylor also appeared on stage, in films such as 1971’s Willy Wonka And The Chocolate Factory and on other TV shows such as long-running ITV series Me And My Girl and Heartbeat.

He received an OBE in 2011 for services to entertainment, following in the footsteps of Oddie and Garden, even though The Goodies used to satirise the government’s readiness to hand out gongs in the 1960s.

Born in Buxton in 1940, he is survived by his wife Christine and sons Ben and Edward.