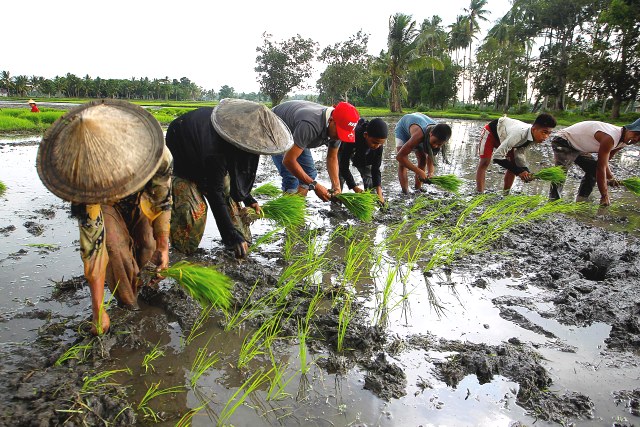 Agriculture-dependent families in Maguindanao are still reeling from the residual impacts of conflict, drought and flooding that affected the province during the first half of 2015. In order to meet the first cropping season of the year, the Food and Agriculture Organization of the United Nations (FAO) launched emergency response efforts that will enable farmers to seize the small window of opportunity to replant their farms, and avoid at least eight more months without sufficient food and income.

“We were in an evacuation centre for about three months. This [displacement] had a huge effect on us farmers. We had to leave our farms and backyard gardens. Our crops were destroyed by drought. We were not able to sell most of our livestock as they died either of hunger or disease,” recalled Tuka Sumalay, a farmer from Tapikan, Shariff Aguak.

Tuka is one of more than 125 000 people uprooted across the 15 municipalities of Maguindanao when hostilities broke out between the Bangsamoro Islamic Freedom Fighters and the Government in February. Re-establishing a sense of normalcy has been a challenge for the majority of the population, who rely on farming as their primary source of livelihood. Farmers had no choice but to abandon their ready-to-harvest crops as they fled to safer grounds. Upon returning to their homes, they had not only lost their productive farm assets such as tools, small machinery and animals, but were also confronted by a dry spell, followed by flooding caused by torrential rains and overflowing rivers and tributaries.

The Department of Agriculture estimates that crop and vegetable production losses in Maguindanao have reached more than 24 000 metric tonnes as a result of these natural and human-induced disasters.

To support the Government in responding to farmers’ most time-critical needs for agriculture inputs, FAO allocated USD 470 000 to help 5 000 farming households (25 000 individuals) in Maguindanao and North Cotabato provinces resume production of rice, corn and vegetables.

“We are working closely with the Department of Agriculture and Fisheries of the Autonomous Region in Muslim Mindanao to enable affected farmers to get back on their feet at the soonest possible opportunity. The restoration of livelihoods and agricultural production in a timely manner is a crucial first step to restoring food security in the area,” said FAO Representative in the Philippines José Luis Fernandez.

Through the project, FAO will distribute a total of 1 410 sacks of rice seeds, 3 590 sacks of corn seeds, as well as vegetable seeds, fertilizer and hand tools. FAO will also conduct workshops and training activities that will help beneficiaries improve their farm productivity while strengthening their capacity to cope with future shocks and emergencies.

“We started the distribution of inputs with an initial 350 sacks of rice seeds, vegetable seeds and fertilizer delivered to farmers in Shariff Aguak and Datu Unsay municipalities,” said FAO Project Manager and Farming System Specialist Cesar Galvan. “This first tranche will cover approximately 175 ha of farmlands and yield at least 612.5 metric tonnes of palay or unmilled rice. Beneficiaries will also be able to plant lowland vegetables that can be harvested within 21 to 30 days.”

“Had FAO not come to help us on time, I would have been forced to sacrifice my children’s schooling so that I could buy fertilizer and seeds. This project is helping us a great deal. We are very thankful,” said Misuari Aba Usman of Datu Unsay Municipality.

FAO is also working with other development partners and Government agencies to help restore the livelihoods of an additional 10 000 farmers and fisherfolk affected by armed encounters in other parts of central and western Mindanao. These efforts are part of the Organization’s larger goal of strengthening the agriculture sector and food security in the Philippines.