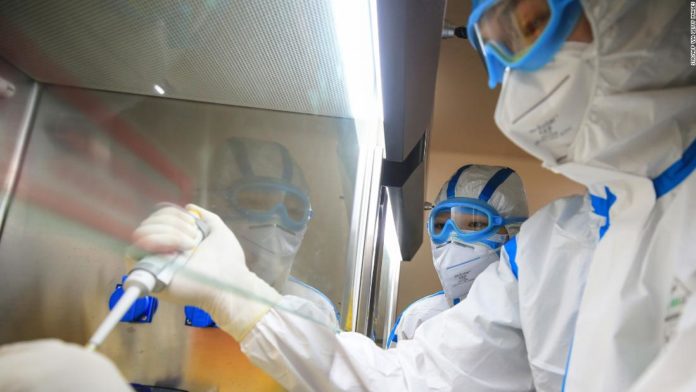 Under the new policy, all academic papers on Covid-19 will be subject to extra vetting before being submitted for publication. Studies on the origin of the virus will receive extra scrutiny and must be approved by central government officials, according to the now-deleted posts.
A medical expert in Hong Kong who collaborated with mainland researchers to publish a clinical analysis of Covid-19 cases in an international medical journal said his work did not undergo such vetting in February.
The increased scrutiny appears to be the latest effort by the Chinese government to control the narrative on the origins of the coronavirus pandemic, which has claimed more than 100,000 lives and sickened 1.7 million people worldwide since it first broke out in the Chinese city of Wuhan in December.
Since late January, Chinese researchers have published a series of Covid-19 studies in influential international medical journals. Some findings about early coronavirus cases — such as when human-to-human transition first appeared — have raised questions over the official government account of the outbreak and sparked controversy on Chinese social media.
And now, Chinese authorities appear to be tightening their grip on the publication of Covid-19 research.
A Chinese researcher who spoke on condition of anonymity due to fear of retaliation said the move was a worrying development that would likely obstruct important scientific research.
“I think it is a coordinated effort from (the) Chinese government to control (the) narrative, and paint it as if the outbreak did not originate in China,” the researcher told CNN. “And I don’t think they will really tolerate any objective study to investigate the origination of this disease.”
CNN has reached out to China’s Foreign Ministry for comment.

According to the directive issued by the Ministry of Education’s science and technology department, “academic papers about tracing the origin of the virus must be strictly and tightly managed.”
The directive lays out layers of approval for these papers, starting with the academic committees at universities. They are then required to be sent to the Education Ministry’s science and technology department, which then forwards the papers to a task force under the State Council for vetting. Only after the universities hear back from the task force can the papers be submitted to journals.
Other papers on Covid-19 will be vetted by universities’ academic committees, based on conditions such as the “academic value” of the study, and whether the “timing for publishing” is right.
The directive is based on instructions issued during a March 25 meeting held by the State Council’s task force on the prevention and control of Covid-19, it said.
The document was first posted Friday morning on the website of the Fudan University in Shanghai, one of China’s leading universities.
When CNN called a contact number left at the end of the notice, a staff member of the Education ministry’s science and technology department confirmed they had issued the directive.
“It is not supposed to be made public — it is an internal document,” said the person, who refused to reveal his name.
A few hours later, the Fudan University page was taken down.
The China University of Geoscience in Wuhan also posted a similar notice about the extra vetting on Covid-19 papers on its website. The page has since been deleted, but a cached version of it remains accessible.
The Chinese researcher who spoke to CNN said the notice was issued a few days ago, adding that only Covid-19 research was subject to the additional checks.
David Hui Shu-cheong, a respiratory medicine expert at the Chinese University of Hong Kong, said he did not encounter any additional vetting when he and a team of mainland Chinese researchers published a clinical analysis of Covid-19 cases in the New England Journal of Medicine in February.
“The process was really simple then,” he told CNN over the phone.
Hui said he was still revising the draft of the paper until 3 a.m. on the day it was due for submission, and the paper was sent to the NEJM by midday.
“There was completely no restriction at all,” he said.
“I don’t know if it is because some researchers published something that is considered sensitive domestically in China. (I’m) not sure if it is because of the controversy about the origin of the virus later, and the non-sensitive stuff becomes sensitive too.”

Origin of the virus

In late December, Wuhan reported the first cases of the coronavirus, linked by authorities to a seafood market in the city. Scientists in China and the West have said the virus is likely to have originated in bats and jumped to humans from an intermediate host — just like its cousin that caused the SARS epidemic in 2002 and 2003.
However, parts of Chinese social media and even the country’s government appear to have launched a concerted campaign to question the origin of the virus.
Chinese officials and state media have repeatedly stressed that there has been no conclusion on the exact origin of the virus. Last month, Zhao Lijian, a spokesperson of the Chinese Foreign Ministry, promoted a conspiracy on Twitter that the virus had originated in the US and was brought to China by the US military.
In China, research papers on the coronavirus are already subjected to layers of vetting after they are submitted to Chinese academic journals, according to an editor at a Chinese medical journal.
Wang Lan, the editorial director of the Chinese Journal of Epidemiology, said all Covid-19 papers have to go through an approval process for “major topics” after being submitted to her journal.
“It has always been the case,” she told CNN. “They have to be approved by three levels of organizations. It’s a long process.”
The Chinese researcher who requested anonymity said under the new restrictions, however, coronavirus research that contradicted the official narrative could be suppressed by Beijing.
“I think the importance is that the international scientific community must realize that any journal or manuscripts from (a) Chinese research institution has kind of been double-checked by the government,” said the researcher. “It is important for them to know there are extra steps between independent scientific research and final publication.”