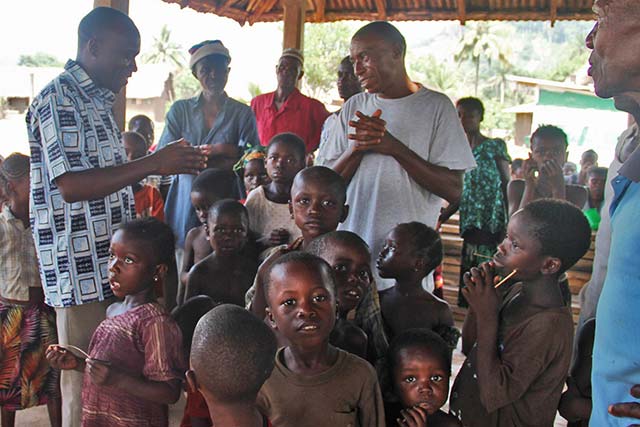 During his tour in farming communities in the Eastern Province of Sierra Leone, Dr Gabriel Rugalema, FAO Representative, extended condolences to Ebola survivors and their families in Perri Village, Dama Chiefdom, and advised them to be vigilant against the resurgence of the disease.

He expressed gratitude to the authorities and members of affected communities for their resilience and participation in the eradication of the Ebola virus disease, as he acknowledged that it has been a trying period for all. He advised the community to continue to abide by the preventive measures prescribed by health workers in the eradication of the Ebola disease and encouraged farmers to intensify the preparation of their land for the next planting season to ensure that the country achieves food sufficiency.

Brima Vandi, Chief of Perri Village, expressed delight over this visit as he revealed that it encourages them to be resilient after going through the devastation caused by the Ebola outbreak. “We were all confused about the rapid death rate of people in our community as most of us neither know the signs nor the symptoms of Ebola” he stated.

He explained that the Ebola outbreak occurred in their community when the rice was due to be harvested. Quarantine measures, especially with the presence of military officers, prevented them from visiting their farms which resulted in great losses in their annual yield. He promised the total commitment and vigilance of the community until the country is declared Ebola free.

Explaining his ordeal, Lamin Sannoh, who survived Ebola, told the FAO team that his farming activities have faced a major setback because he was strictly advised by health workers to avoid hard labor until his immune system had improved. Sannoh lost his wife and two children from the disease. His house was fumigated and his properties, including food reserves, were burnt and disposed by health officials as a measure to prevent further spread. “Since I left the treatment center, I have been surviving from the assistance of the community because the bulk of my annual yield had been destroyed by bush animals as there was nobody to scare them in my absence” he mourned.

It is barely a year now since the first case of Ebola was confirmed in Sierra Leone – on 24 May, 2014, and over twelve thousand people have been infected by the virus. The outbreak has got multiplying effects on varied sectors in the country, including agriculture as most farmers are still grappling to catch up with the next planting season because of the lack of input and starter kits.

In order to help survivors restart their lives, FAO, together with the Ministry of Social Welfare, Gender and Children’s Affairs, will conduct an assessment of the impact of the outbreak on survivors’ livelihoods. FAO also continues to participate in sensitization campaigns on EVD transmission within farming communities across the country.