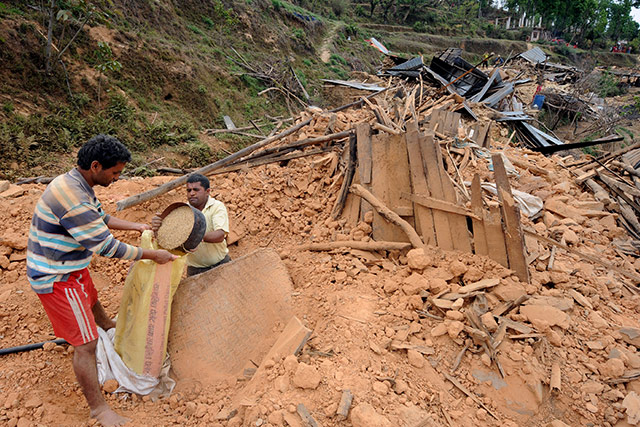 The two recent earthquakes in Nepal have had a major impact on food security and agricultural livelihoods. Around two-thirds of Nepalese depend on agriculture for their livelihood – many at a subsistence level. Affected families have lost livestock, standing crops, seed stores, agricultural implements and more. Market disruptions have constrained the movement of agricultural products.

The earthquakes struck during the wheat harvest. Maize was just planted and rice sowing was expected to start in late May. Before the disaster, the estimated wheat production was 1.8 million tonnes – 5 percent below last year’s record harvest. This forecast will be further reduced due to crop damage and disrupted harvest operations in earthquake-affected areas. Farmers who miss the imminent planting season will not harvest rice – Nepal’s primary staple food crop – until late 2016. This will increase food insecurity and prolong dependence on expensive external assistance.

Most Nepali farming systems are characterized by subsistence-based agriculture, with livestock representing one of the few sources of cash income and a vital contribution to household diet. More than 8 000 large animals, 10 000 small animals and 100 000 poultry are estimated to have died in the earthquakes.

Increased risks of landslides are expected as a result of the earthquake. Some have already blocked rivers, potentially flooding nearby communities.  Once the monsoon starts in earnest, this risk will increase. The landslide may further hinder the restoration of food security in the earthquake affected districts.

Among the 14 most affected districts, FAO is providing immediate assistance in six districts – Sindhupalchowk, Nuwakot, Rasuwa, Gorkha, Dolakha and Dhading – where the most devastation occurred: 74 percent of deaths, 23 percent of people injured and 54 percent of homes destroyed. Donor funding in support of agricultural livelihoods so far has been limited.

Needs in the agriculture sector are substantial and time-critical. The amount of agricultural support mobilized in the next 90 days will have an enormous stake in enabling an early recovery from this disaster. This cost-effective support will allow farmers to resume their livelihoods and regain self-sufficiency, while increasing food availability in local communities and markets.

Farming families also need support to replace damaged farming implements for tending their land and crops, and to rebuild infrastructure such as livestock shelters, irrigation and rainbow trout fisheries.

FAO will soon reach around 38 000 farming families with 190 tonnes of rice seed and 50 000 packets of assorted vegetable seeds for immediate planting; close to 40 000 grain storage bags to reduce further food losses; and a variety of livestock inputs to keep surviving animals healthy and productive. This assistance is possible thanks to USD 1.7 million in contributions from the Governments of Belgium and Italy, and FAO’s own resources. Needs, however, are much greater with more than 230,000 farm families residing in the six most affected districts alone. To date, planned rice seed distributions cover less than 10 percent of what is needed.

FAO and WFP are co-leading the Food Security Cluster – a group of 47 partners – to ensure an effective, coordinated and evidence-based response. As part of these efforts, FAO fielded a multidisciplinary team of 18 experts to assess agricultural damage and losses in the six most severely affected districts. Results of the joint FAO-WFP food security assessment will be finalized shortly and inform the upcoming revised appeal in response to the Nepal earthquakes.