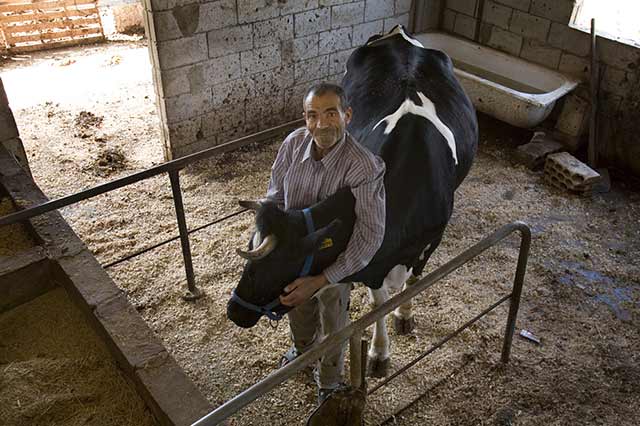 Concerns over the spread of high impact transboundary animal diseases are mounting in Lebanon and neighbouring countries as some of the 1.5 million refugees fleeing the conflict in Syria have brought with them large numbers of unvaccinated sheep, goats, cattle, and other animals, FAO warned today.

The Organization is now carrying out the second phase of a campaign to immunize as much of the country’s livestock as possible, with a target of vaccinating all animals. This is, however, expected to be difficult to achieve because of the challenges in reaching some of the more remote areas and in gaining the confidence of the farmers and pastoralists residing there.

The project follows on from a successful initial vaccination programme last year which was credited with stopping any widespread animal disease outbreaks. Both phases received funding from the United Kingdom’s Department for International Development (DFID).

The vaccination campaign aims to cut down the numbers of animals becoming ill or dying due to preventable diseases and to protect vulnerable people living in rural areas. These communities are already seeing a strain on their natural resources because of the spill-over effects from the humanitarian crisis in Syria. As many as 70,000 cows and around 900,000 sheep and goats could be exposed to transboundary diseases if left untreated, according to Lebanon’s Ministry for Agriculture.

“The most common problem we are having is animal fever,” said one farmer in Lebanon’s eastern Bekaa Valley. “Some animals are dying. The viruses were affecting our income. This year the cattle got the vaccination so we hope the result will show in the near future,” she added. The fever reported highlights the importance for every farmer to have access to good veterinary care and other animal health personnel.

“The idea is to reduce the risk of disease, and avoid drops in the productivity of the national herd,” said Maurice Saade, FAO Representative in Lebanon. FAO estimates that almost 60 percent of livestock farmers in Lebanon depend on dairy animals as their main source of income.

Several animal diseases are highly contagious and can spread extremely rapidly, irrespective of national borders. They can cause high mortality and morbidity in animals, and so have serious socio-economic and sometimes public health consequences.

At a conference earlier this month, FAO and the World Organization for Animal Health (OIE) pledged to eradicate sheep and goat plague by 2030. Another step in the emergency plan is to provide a communication network that can directly connect different monitoring centres across the country to establish an early warning system, should any new diseases be detected.

Lebanon now has the highest per capita ratio of refugees in the world. They account for one-fourth of the population and their arrival has seen unemployment figures double.

The stress being placed on the country’s natural resources and food production systems is particularly worrying, as up to 25 percent of Lebanon’s active population is employed in agriculture. More people than ever before are therefore now in need of animal protein and milk.

FAO is appealing for $32 million in urgent funding for Lebanon as part of a wider regional appeal to assist residents and refugees in Iraq, Jordan and Turkey.