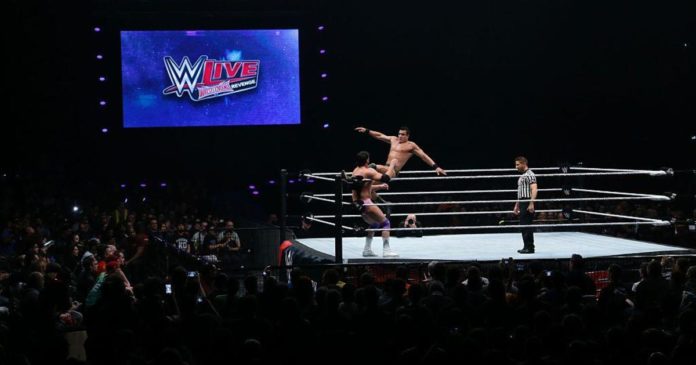 Schools, bars, clothing stores and most office buildings are closed. Television hosts are broadcasting from their homes and other sources of entertainment, like theaters, have been stuttered. Wrestling, however, appears to have survived the coronavirus lockdown.

Orange County Mayor Jerry Demings said on Monday that WWE was originally deemed a non-essential business, but Governor Ron DeSantis’ office decided to change that. “With some conversation with the governor’s office regarding the governor’s order, they were deemed an essential business,” Demings said during a press briefing. “And so, therefore, they were allowed to remain open.”

CBS News has reached out to DeSantis’ office for more information on the decision. WWE tapes in Orlando, which is part of Orange County .

The WWE has been airing pre-taped programming over the last several weeks, including WrestleMania 36, CBS Sports reports. However, “Monday Night Raw” will now air live from the WWE’s training facility in Orlando, Florida. Other WWE events will also be live from Orlando, including SmackDown on Friday.

Matches will be held without fans in attendance, according to CBS Sports. However, social distancing will be difficult to execute when wrestlers are being asked to physically touch each other in the ring.

In a statement to CBS News, WWE said, “We believe it is now more important than ever to provide people with a diversion from these hard times.”

“We are producing content on a closed set with only essential personnel in attendance following appropriate guidelines while taking additional precautions to ensure the health and wellness of our performers and staff,” the statement continues. “As a brand that has been woven into the fabric of society, WWE and its Superstars bring families together and deliver a sense of hope, determination and perseverance.”

In an email to CBS News, Governor DeSantis’ office said essential services under the executive order includes employees in professional sports and media production with a national audience, only if the location is closed to the general public. So, WWE would fall under this category, since the upcoming matches will be closed to the public.

The executive order also includes employees at services and programs addressing mental health, substance abuse, domestic violence and other urgent counseling, as long as those services are being offered within social distancing guidelines. Employees at theme park and entertainment complexes, zoological parks and facilities, and aquarium facilities, all of which are closed to the general public, are also essential, the governor’s office said.

The governor’s office said theme parks, zoos and aquariums and sports and media production “were added [to the essentials list] because they are critical to Florida’s economy. It is important to note that professional sports activities may only be considered essential if the event location is closed to the general public.”

Like most states, Florida is under a stay-at-home order until at least April 30. DeSantis issued such an order as pressure from health care workers and local officials mounted and the number of confirmed cases in Florida rose.

President Trump said he is leaving it up to the states to determine whether they will issue their own stay-at-home orders. “The governors know what they’re doing,” Mr. Trump said Friday.