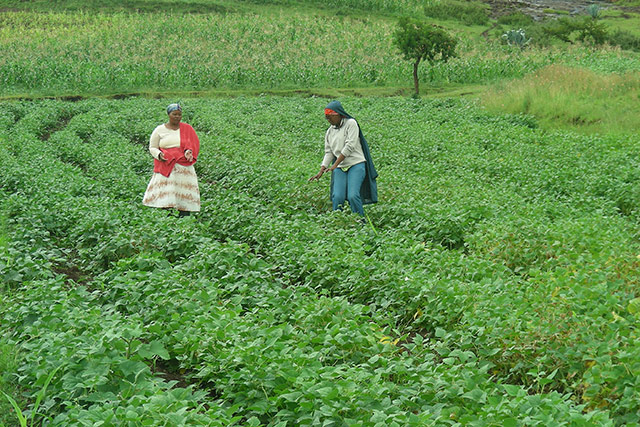 Recently, farmers in Lesotho have been consistently obtaining low yields from their staple crops. This has affected food production as well as considerably reducing incomes.

The causes of these low crop yields are diverse and include low soil fertility, soil erosion, drought, erratic rainfall and use of low yielding seeds. Farmers also struggle to find locally improved, well adapted seeds as most available seeds originate from beyond Lesotho’s borders and some may not be adapted to all agro-ecological zones the country. It is therefore critical for Lesotho to address the issue of access to quality seeds by resource-constrained farmers. In the words of Dr. Gaoju Han, FAO Representative in Lesotho, “Seed security is crucial for the growth of the agricultural sector in general and productivity improvement for smallholder crop farmers in particular”.  Things have started to change with an emerging group of certified seed producers in Lesotho.

In 2006, a two-year project jointly implemented by the Food and Agriculture Organization of the United Nations (FAO) and the Ministry of Agriculture and Food Security (MAFS) supported a group of farmers in improving seed production in Lesotho.
The project targeted the major staple crops – maize, sorghum and beans. The activities were then taken up and consolidated by a European Union-funded project from 2009 through 2011.

Thanks to these projects, 50 active farmers are currently engaged in seed multiplication, producing over 80 tonnes of certified maize seeds and over 30 tonnes of certified bean seeds per year with technical support from MAFS. A seed producers’ association has been formed and has been active since May 2013.

Since 2012, 18 500 vulnerable farmers in Lesotho have received agricultural inputs through the MAFS/FAO Emergency and Resilience Programme. These inputs included a 5-kg bag of maize seeds and a 5-kg bag of bean seeds. A large quantity of these seeds, worth over LSL 1 million, was purchased locally from the seed producers supported in earlier projects.

Through this initiative, smallholder farmers who previously struggled to purchase imported and expensive hybrid seeds are now able to buy affordable but high performing open pollinated seed varieties from the local seed producers. The main advantage of these open pollinated varieties is that they can be replanted without losing their production vigour. But this has just been the start.
More effort is now required to sustain and upscale the gains made through this initiative given that the performance and output of smallholder and resource-constrained farmers is unlikely to improve without access to quality seeds. The initiative needs to be up scaled throughout the four agro-ecological zones in order to realise widespread impact.

The pioneering seed producers will need technical support and mentoring services from the relevant technical departments of government. They will in particular need to be supported in promoting and marketing their certified seeds. They can also benefit from direct policy interventions including preferential procurement which would ensure that government subsidy programme does not inadvertently leave them out due to their less formal business model.