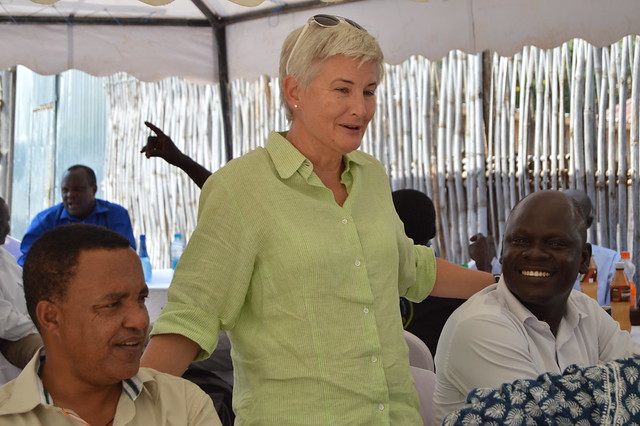 There was a dearth of good news from South Sudan in 2014. We can end the year on one good note, however. In September 2014, despite the ongoing crisis in South Sudan, two young entrepreneurs turned ideas into action by opening “Omega” the country’s first farm-to-table restaurant. Omega is well situated in the country’s capitol, Juba, in Central Equatoria State, and specializes in a range of food known and loved by South Sudanese – as well as by the many generations of expatriates who have worked in South Sudan over the years.

Omega was started by Daniel Deng, originally from South Sudan, and Jeffrey Campbell, from Jamaica, who met while studying at the University of Pennsylvania. The business venture began when Deng returned home to South Sudan and acquired management responsibilities for Freedom Farms through DETCO, an investment and trading company he established. Freedom Farms is located on the outskirts of Juba in the village of Luri, where the community members have leased land to Freedom Farms since 2009.

The twenty one acre enterprise began as a pig farm, with up to 500 pigs at any given time. Operations are expanding to include 3 acres of land for vegetable farming, equipped with a drip irrigation system. Currently, the fresh vegetables being served at Omega are locally purchased from markets in South Sudan. Omega and Freedom Farms are actively contributing to the growth of the country and the wealth of communities by creating income generation for farmers, employment opportunities and building capacities for students. Just recently, 40 students from the University of Juba were offered practical field training at the farm.

Jeffrey Campbell, Omega Operations Manager, reflected on his vision for the future, “We want to export our products from South Sudan to our regional neighbors. We hope to be one of the leading exporters of meat and vegetables in the country someday.”

To commend the FAO South Sudan staff for exceptional accomplishments under extremely difficult conditions this year, FAOSS Representative Sue Lautze hosted a holiday gathering at her house in December 2014. It was only fitting that Omega was selected to supply the food for the event. The FAO staff enjoyed Omega’s fresh local products and shared their reflections on successes over the past year. Chief among these was gratitude that “we are all still alive.” In 2014, FAOSS mobilized just over 100 million USD and reached over 2.9 million people with emergency livelihood support, while also tripling its delivery of technical assistance.

“The FAO South Sudan team has worked so hard this year, and often in trying and dangerous circumstances. It was a pleasure to gather everyone together to end the year with not the taste of bitterness about the difficulties this young country is experiencing, but to enjoy the great food from Omega. Further, Omega represents the future of this country – high quality domestic agriculture production,” Lautze said.

On the eve of 2015, the FAO team is preparing to expand its efforts in South Sudan. FAO has appealed for USD 89 million to assist nearly half a million households at risk of food and nutrition insecurity with emergency livelihood kits, fuel efficient stoves, and improved access to nutritious foods. Concurrently, FAO’s technical assistance program will expand markedly, thanks to recent agreements signed with the European Union.

ICRC calls to reduce tensions and prevent violence in Jerusalem

World Red Cross Day in Venezuela: celebrating the unwavering drive of the heroes who help those most in need

Science, technology and innovation are crucial to efforts aimed at transforming agri-food systems