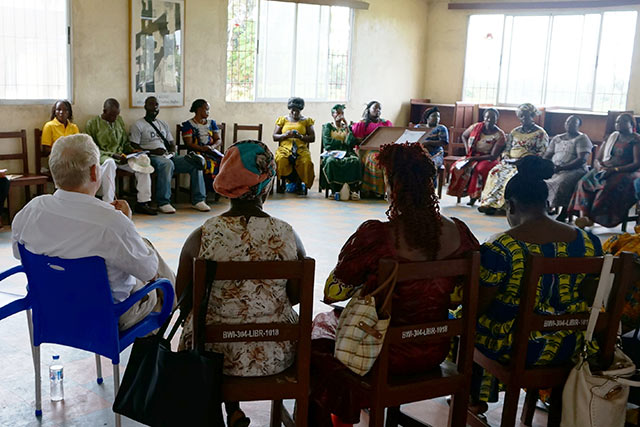 So far, no cases have been declared in Côte d’Ivoire. However, because the country shares borders with Guinea and Liberia, the Government has taken preventative measures to reduce the risk of the virus entering the country, such as closing borders until further notice, closing certain markets on the borders, banning the hunting and consuming of bush meat and mounting a major campaign to raise awareness about the transmission of the virus (animal-to-human and human-to-human) as well as the basic rules to respect to avoid transmission.

However, the necessary precaution messages taken in Côte d’Ivoire risk having repercussions on the food security of vulnerable groups of people whose main source of food is bush meat.

The closure of borders has caused the supply system of rural markets, especially in border towns, to become dysfunctional. Markets are facing supply problems because the strong demand from neighbouring countries (Guinea and Liberia) has all but ceased. Very few traders go to the some markets such as Banneu, Kouyaguiépleu (Zouan Hounien), Gbapleu and Gbinta (Danané) and Tiobly, Bakoubly and Toyebly (Toulepleu) where people are finding it difficult to procure food or sell their produce. Producers are having to lower their prices considerably.

The price of 20 litres of red palm oil has dropped from CFA 15 000 to CFA 9 000 (i.e. a 40 percent loss) and instead of three bananas, they are selling six for CFA 50. It is the same story for cabbage, which is now selling at CFA 1 000 for six (instead of three cabbages for that price). The price of a basket of cassava has fallen from CFA 500 to CFA 200. Smallholders’ income has fallen by between 40 and 60 percent depending on what they produce. It has also led to an explosion in prices for imported foodstuffs in border towns compared with last year. The price of frozen fish has risen from CFA 100 to CFA 300, and the price of mass-consumption imported rice has risen from CFA 350 to CFA 400. The price of beef has remained stable but supplies are very low (World Food Programme Mission/Danish Refugee Council).

FAO is currently implementing its Regional Response Programme to tackle the Ebola outbreak in consultation with its partners to boost populations’ livelihoods and food security. In Côte d’Ivoire, FAO has developed a programme to increase the availability of meat by encouraging the production of short-cycle livestock such as chickens, ducks and rabbits and increasing populations’ awareness. In partnership with the Ministry of Animal and Fish Resources, FAO is working to mobilize funds to start these activities as soon as possible.

Ebola: A strategic and multi-sector response

The absolute priority for FAO and all its partners is to stop the epidemic and put an end to the tragic loss of human life. Immediate actions also need to be established to monitor the most vulnerable households in border areas, whose livelihoods are severely eroded. FAO’s strategy is therefore focused on supporting activities that can save lives, and safeguarding food security, nutrition and livelihoods.

In view of this, FAO has developed a regional response programme. FAO’s strategy is based on four pillars: