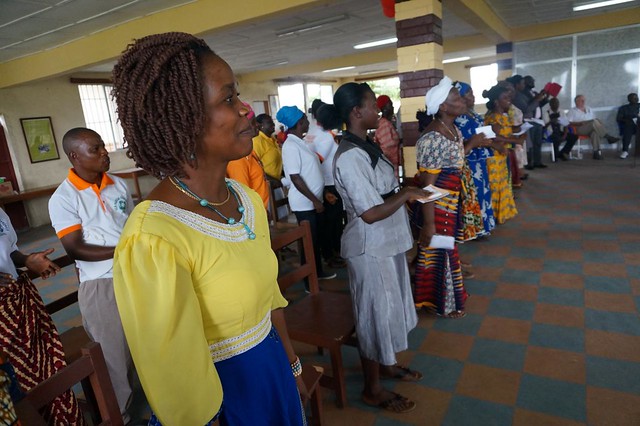 Mr Martin is on a week-long mission to Liberia and Guinea as part of the Food and Agriculture Organization of the United Nations’ support to the subregion in the wake of the Ebola Virus Disease (EVD) outbreak in West Africa.

During the meeting, Rashida V. Yambasu, Yama Jabateh and other affected women recalled the traumatic effects of Ebola on their families, farming, savings and loan schemes and livelihoods. “Before Ebola,” Rashida began, “we had our farms, cross-border markets and savings clubs. This disease came and within a second, it damaged everything. We can no longer work together, shake hands and pay back money we borrowed. We need your help.”

Yama Jabateh was not crying when she started speaking, “What Ebola did to my district in Bakedu, Lofa County, made me scared. One day people called me to say people were dying from a strange sickness called Ebola. We had nowhere to go. So we sat down. The sickness took away my husband, my children and everybody in my family. I am alone now.” She then broke down in tears and was helped off stage.

Gender Minister Duncan-Cassell praised FAO’s enormous support to Liberian women especially during the post-war collaboration on the Danish International Development Agency (DANIDA)-funded women’s empowerment project. “If FAO helps in empowering women who are in this room today, the rest of Liberia is empowered. They are trained, committed and are capable of paying back loans, but this disease stopped them.”

FAO remains committed to supporting women regain their livelihoods. “When we went to Lofa in September and heard accounts of impacts of Ebola on women’s activities, we knew we had to come in and help where possible”, said Mr Bonte. Mr Martin praised the women for their courage, dynamism and vision for their country, “You are a strong people and I am confident that we can defeat the disease. With our limited resources, FAO wants to support Liberia in a strategic manner.”

Mr Martin underscored the need to rejuvenate the livelihoods of rural women affected by Ebola by giving them the necessary assistance. With the improvement of the epidemiological situation today in Liberia, he stressed the need to keep the vigilance high and mobilize agricultural networks and women’s associations to conduct sensitization and awareness campaigns against EVD.

Shortly after his arrival in Monrovia, Mr Martin met with the World Food Programme (WFP). FAO and WFP focussed on key areas such the impact of Ebola on food security, livelihoods and agriculture in Liberia as well as the food security cluster working group.

The EVD outbreak, which started in March 2014, has had tremendous negative impacts on all aspects of life in Liberia. In September and October 2014, FAO commissioned two separate assessment missions to Lofa and Bong Counties during which it was observed that women’s village savings and loan schemes, business ventures, agriculture and other livelihoods activities were affected in Ebola hard-hit communities. FAO thus intensified its collaboration with the Government of Liberia and partners in galvanizing support to assist affected populations recovered faster from the shock.