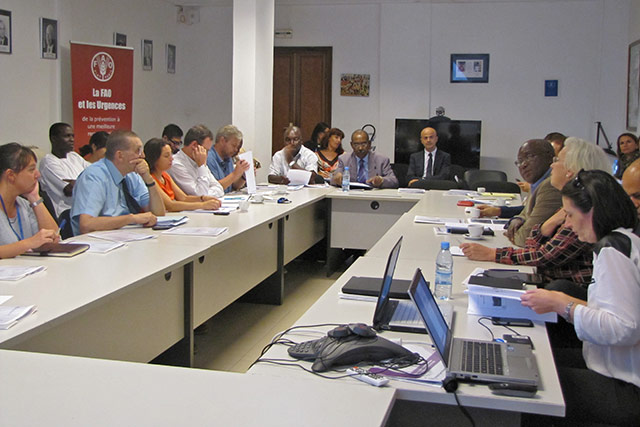 The Food and Agriculture Organization of the United Nations (FAO) presented its Regional Programme in response to the Ebola virus disease (EVD) outbreak in West Africa to financial partners in Dakar on 31 October 2014.

“FAO’s response is based on two crucial aspects: innovation and a multidisciplinary approach. We have no choice but to innovate in order to limit the risks of transmission, restore confidence in value chains on every level and recreate the link between producers and consumers. At the same time, FAO’s multidisciplinary expertise, especially in emerging diseases, is sorely needed to reduce the risks of an outbreak such as this from  happening again,” said Vincent Martin, FAO’s Response Coordinator to the Ebola outbreak.

FAO is appealing for urgent funding to enable it to assist the most vulnerable communities in affected countries and support the preparedness of at-risk countries. It estimates that USD 30 million are need over the next twelve months to assist 90 000 vulnerable households in the region through immediate actions for a mid- and long-term impact.

“This crisis is unlike any we have seen before because of both its nature, and what it involves in terms of response. Our response will have to be innovative and offer various, adapted solutions to build up the resilience of vulnerable populations. In particular, it will involve a shift of paradigm by setting up health monitoring and response systems that take into consideration the complexity of the trends emerging at the crossroads of agriculture, the environment and health,” urged Vincent Martin.

During the meeting, organized jointly with the World Food Programme (WFP), the two organizations presented recent developments with regard to the outbreak, their respective response programmes and, more specifically, actions that they are carrying out together.

In this crisis, which is simultaneously a health, humanitarian and social crisis, there are several areas in which the activities of the two UN sister organizations complement each other.

In particular, FAO and WFP carry out joint assessments in affected countries to measure the impact of the outbreak and its challenges for agriculture, food security and livelihoods. This involves rapid assessments of the impact of EVD on food security and agriculture and FAO/WFP Crop and Food Security Assessment Missions (CFSAM). Combined with tools specific to FAO (GIEWS) and WFP (mVAM), these assessments are now beginning to produce the first results. We already know, for example, that the disease has reduced the workforce in affected households, which has an impact on agricultural production, and that the fear factor also has a significant effect on the workforce, which, in addition to the effects of quarantine and market closures, influences the sale of production and therefore prices.

For FAO and WFP, the assessments underway are crucial to measure the impact on agriculture and food security and the risk of a food crisis in the region, and thus to decide upon the scale of the required response.

Furthermore, WFP operates the United Nations Humanitarian Air Services (UNHAS), which is currently the principal means of access to affected countries, owing to the closure of borders between affected countries and several neighbouring countries, as well as travel restrictions and the interruption of many air links to these destinations. All FAO experts coming to help in affected countries are therefore brought from Dakar by UNHAS.

The partners attending the meeting expressed great interest in the FAO/WFP assessments. Discussions made one thing very clear: the situation demands continuous monitoring and vigilance, and it is crucial that everyone remain in a permanent state of alert. The participants were in agreement about the fact that this health crisis is different – different because it has, and will have, profound political consequences on societies, and different because the situation is evolving extremely quickly, as fast as the outbreak of a war. In three words, this crisis is dynamic, uncertain and psychosocial, and requires adapted and concerted responses from the international community.