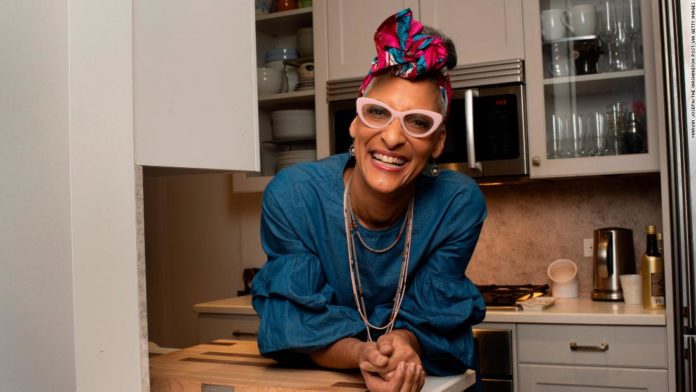 She wants to see her family. She wants to go to a movie. She wants to go to the theater. And when her husband showed up the other day with a package of toilet paper and a bag of flour, after she’d tried unsuccessfully to find it online, she was elated.
“I was like, ‘Oh, thank God!'” she recalled to CNN.
Hall, a former host on daytime talk show “The Chew” and a two-time “Top Chef” contestant who was quick to become a fan favorite, has been “staying at home” at her home in Washington, D.C., a place she admitted she doesn’t spend much extended time when she’s juggling projects and appearances.
But between seeing her neighbors more than ever and experimenting with her air fryer and zoodle maker (“I think I used that thing once”), she’s managed to stay quite busy. (She recently cooked with “Pose” star Billy Porter for in a collaboration with Amazon.) She knows cooking inspiration, much like some pantry staples, is running in short supply for many home cooks who’ve been called to action in their own kitchens as the country aims to slow the spread of the virus with social distancing measures.
With that — and the particular grocery challenges of the time — in mind, CNN asked Hall, for some help for those finally getting a little tired of eating spaghetti four times a week. (No disrespect to the beloved noodle.)
“I want people to feel like they can take these recipes and make them their own because our pantries are limited and dependent on the pantry that you have,” she said. “I think all of these recipes will lend themselves to substitutions.”
The recipes Hall provides below are packed with flavor and unintimidating.
“Necessity is the mother of invention,” Hall said. “A lot of people are finding that they’re cooking a lot more than they ever did. Some people are finding the joy in the kitchen. Some people are like, ‘Oh my gosh, I’m not as bad as I thought.'”
The pandemic has done more than just take people back to their kitchens.
It has also put a spotlight on food deserts and the issue of food insecurity, as record numbers of people turn to their local food banks for assistance. This moment has “put us in a place where we are having to see how other people sustain their lives,” and it’s important to be mindful of that, she said.
Importantly, she has tips for how to do that, too, if you are able.
Sharing extra portions of food with neighbors — something she often does by nature of her job — is one way. Buying food delivery gift cards (which also helps local restaurants) or leaving care packages of non-perishable foods on the doorsteps of vulnerable neighbors, accompanied by a caring note, are other options.
“[You] could also do bags of, let’s say, a corn bread recipe and give them the recipe and the ingredients,” she said. “I think that there are some creative things that you can do.”
Hall is the author of three cookbooks, one of which is titled “Cooking with Love,” a phrase that’s really all the inspiration you need at the end of the day.

“Everybody knows a burger. Usually, if you want a chicken burger, it is just, ‘Eh.’ You know? But I’m taking the idea of a chicken burger, and you can even take that burger and turn it into a chicken meatloaf. I think people are willing to try things more now because they’ve been making the same things or they’re just like, ‘You know what? I’m just going to try something new because I have the time.’ So that’s why I chose that.”
Read the recipe here.

“I chose the collards and kielbasa because you can use any greens, you can use any sausage. And a lot of people have sausage in their freezers, or they just have them laying around. I mean, you can even use a breakfast sausage if you want it to. But I happen to love collard greens and a lot of times I make them braised. But the other day I made some that were just sautéed in a pan, and then I tossed it in some pasta. So you can saute any ingredient — it could be collards or mustards or Swiss chard or kale. Then you can have a kielbasa — or not. You can use some kind of meat substitute — like beyond meat, over some kind of vegan sausage or tofu.”
Read the recipe here.

“It’s a great base. If you don’t like peanut butter, don’t use it. If you can’t eat peanuts and you can do almonds, throw almond butter in there. If you want to just leave out the peanut butter all together, leave it out because the ginger and the tomatoes will be so flavorful. I think there are ingredients there that people wouldn’t think to put together. I’m trying with something very simple to have people think outside the box.”
Read the recipe here.

“It’s called comfort food for a reason. And this was my granny’s pound cake. A friend had actually sent me a picture; she’s at home with her mom and her mom made a pound cake. She said her mother’s baking so much, which she doesn’t normally do. I said, ‘It’s because she probably enjoys having you at home!’ You can make the pound cake — let’s say if you make it in loaves — and sear the pound cake and you can eat it with berries and whipped cream so that it’s like a shortcake. You can grill it. You can do a trifle with it. I mean, there’s so many different things that you can do with a pound cake.”
Read the recipe here.

“Even though this particular one I was doing in January as a version of Hoppin’ John, I have in my pantry black beans, I’ve got chickpeas, I’ve got all of these different beans, so you can swap out the beans. You can also swap out the beans entirely and do roasted vegetables. This even works with frozen vegetables. If they’re frozen, dry them off, toss them in oil, salt, pepper, put them on a sheet pan into an oven at 450 degrees, and char them. That can be broccoli. It can be cauliflower. It can be okra. It can be whatever you want it to be. So this chunky tomato soup is really just a backdrop of something that people can just sort of make their own and you can change the flavor profile. Here I have simply just salt and pepper and garlic, right? You can use Italian seasonings. You can use Mexican seasonings. You can do anything. Whatever seasonings you have, you can change the profile of this soup. Imagine if you have this brothy soup and you add tortilla chips or Fritos and some chicken. You actually have tortilla soup. You want to keep it brothy because now we’re in the spring, so it’s not really stew-y. Once you get comfortable with your recipe, now you can figure out how you can change it and go to the pantry. I went through all of my spices. This is embarrassing, but I was like, ‘What is my oldest spice?’ I had something from — get ready — 1990. How is that here? I wasn’t in this house in 1990. Did I move my spices? Did it keep getting pushed to the back? I don’t even understand. We’ve had our kitchen redone, but I still have the spice from 1990. I don’t even know.”
Recipe below, courtesy of Hall:
2 tablespoons extra-virgin olive oil
Kosher salt and freshly ground black pepper
2 onions, diced
3 garlic cloves, sliced
2 carrots, peeled and diced
1 celery rib, diced
½-1 teaspoon chile flakes
1 (14.5-ounce) can fire-roasted diced tomatoes
2 cans black eyed peas, drained and rinsed
2 scallions, thinly sliced
Heat oil in a Dutch oven over medium heat. Add the onions and ½ teaspoon salt. Cook, stirring for 1 minute, then add the garlic. Cook, stirring occasionally, until tender, about 5 minutes. Add the carrots, celery, chile flakes, and ½ teaspoon salt. Cook, stirring often, for 2 minutes.
Add the tomatoes, 3 cans of cold water, and ½ teaspoon salt. Bring to a boil, then reduce the heat to simmer for 10 minutes. Add the black eyed peas. Continue to simmer for 10 more minutes or until the peas are heated through. Adjust for seasoning, if necessary.
Serve hot in bowls with scallions on top. The soup may be served over rice or with cornbread, if desired