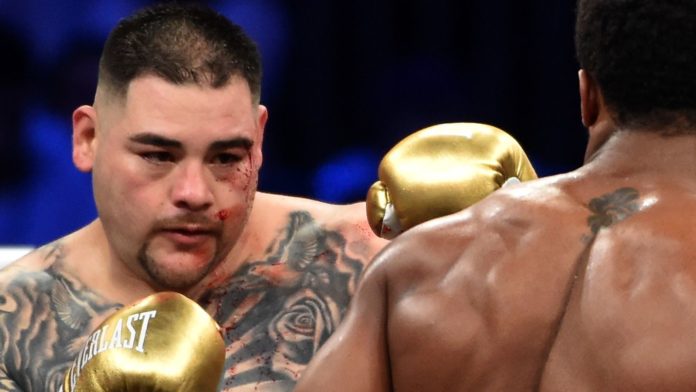 “I would like to go over there with Canelo”

Andy Ruiz Jr’s search for a new trainer has seen him target Eddy Reynoso, who is in Saul ‘Canelo’ Alvarez’s corner.

That would mean an alliance between Mexico’s two most high-profile boxers in the same gym.

“We’re talking with Canelo’s team, I think that would be a good one for me to join if we go that way,” Ruiz Jr said.

“Right now there hasn’t been any contract signed, but I would like to go with Team Canelo.”

Reynoso previously told ESPN: “It would also be an honour to work with the first heavyweight champion of Mexican descent.”

Reynoso and Canelo’s gym is in San Diego, California, the home state of Ruiz Jr.

Mexican-American Ruiz Jr is hunting for a new trainer after parting ways with Manny Robles, who was in his corner when he shocked Anthony Joshua then lost the rematch.

Ruiz Jr apologised for his lack of dedication to a visibly angry Robles moments after conceding the IBF, WBA and WBO heavyweight titles back to Joshua. He admitted to “partying” and being “overweight”.

They then didn’t communicate at all for a month after the fight.

“I’ve got the rest of the belts so it only makes sense.”

“My job is not to call him every day,” Robles told Sky Sports. “He’s a man, not a kid, and must be treated as such.

“You can’t convince someone to want something.

“The fame and money has been overwhelming for Andy. He’s got to know how to handle it. Maybe after this defeat, the game has humbled him.

“Stay humble or be humbled.

“The first three months after beating Joshua on June 1, I had very little communication with him.

“I was in the gym but he was at home, doing his own thing. I wasn’t able to see him or really talk to him.

“I was disappointed by everything leading up to the result [of the rematch]. The preparation. Fights are won in the gym and, when you don’t go into a fight at 100 per cent this is what you get.

“It was a lack of time in the gym, too many distractions, and not being focused like I expected him to be. So this is the result that you get.

“He wasn’t prepared for this type of success, fame or money so it could be overwhelming.

“Preparation is key to beating anybody.

“He is an incredible fighter and has proved that to the world. He is a fighter to be reckoned with – very durable with great skills but he’s got to be ready.”