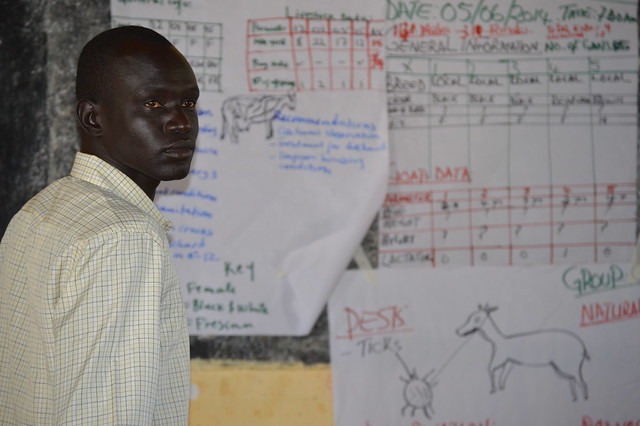 After eight weeks of intensive learning in the field and the classroom, nineteen South Sudanese graduated from FAO South Sudan’s Agro-Pastoral Master Training Course on 7 June 2014 in Lira, Uganda. The course developed the skills of public and private extension service providers to develop community capacities for enhancing agro-pastoral production for improved food security, resilient livelihoods and better incomes. The Master Trainers will particularly focus on vulnerable — but viable — active agro-pastoralists who depend on agriculture and livestock production.

Louis Bagara, a participant working in Lakes State said, “Some integrated pest management approaches were new to me. I liked it because it is a simple technology that uses local resources which can increase production in terms of pest and weed control.”

James Thon, an agricultural technician, farmer and now Master Trainer, added, “Last year I failed to grow sweet potatoes because I could not get the vines where I live in South Sudan. When we were introduced to this technology, I fell in love with it -it is a take home technology for me.”

The Master Trainers travelled to Karamoja, Uganda to review Agro-Pastoral Field Schools in action. With climatic conditions and livelihood systems similar to the parts of South Sudan where the participants will apply their new skills, these field visits were invaluable. The field work was complemented by coursework on best practices in production, field observation methodologies, running and managing Field Schools, and identifying common diseases in crops and livestock.

The training course was funded by the Governments of Spain and Switzerland within the framework of the “Lakes State Agropastoral Community Resilience Program” and the “Improved Food Security and Livelihood Development for Agropastoralist Communities in Northern Bahr el Ghazal and Warrap States project”.

Initially planned for Lakes State, the December 2013 crisis forced FAO to rethink its strategy for the Master Training Course and led stakeholders including the Government of South Sudan to relocate the course to Uganda for security reasons. The Director-General of Agriculture Extension and Pastoralist Development in South Sudan, Mr. Augustino Atillio, was one of many who supported the training course.

“This training is very important to South Sudan – we have been trying to put in place policies and institutions that can promote the implementation of extension services, so that we can deliver the services expected of us” he stated. The course would not have been possible without the support and high level participation by officials from the Government of Uganda and the FAO office in Uganda.

The graduates plan to share their knowledge and newly acquired skills with their respective communities in Lakes, Northern Bahr el Ghazal and Warrap States. On graduation day, Joseph Malkoi reflected the sentiments of many of the course by stating, “I want to help my community. I will give them training, support them and go with them to demonstrate what I’ve learned here.”