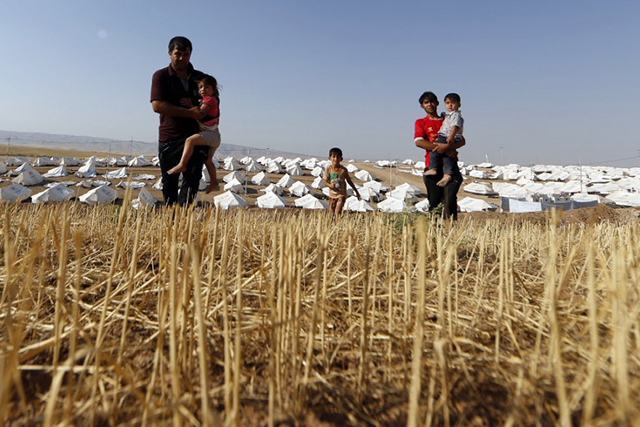 Iraq is facing serious food security concerns following the recent escalation of conflict in a large swath of the country, FAO warned today. Over 1 million people so far have fled their homes and farms since January, leaving behind jobs and possessions just as the main harvesting season for wheat and barley crops was getting under way. In total, 2 million Iraqis are now displaced within the country, including those affected by the Syrian conflicts and previous events in Iraq.

As a result, Iraq’s favourable crop forecast for 2014 is now in jeopardy, according to FAO’s Global Information and Early Warning System (GIEWS) alert. Prior to the crisis, plentiful rainfall meant the Organization had predicted an above-average wheat harvest of 3 million tonnes for this year, some 16 percent above the five-year average. The barley crop was also expected to hold steady at 900 000 tonnes, still 15 percent above the five-year average.

Now, however, prevailing civil insecurity and associated access problems, labour shortages, and disruptions in transport and marketing are expected to significantly impact harvesting and domestic production and supply. The governorates most affected by the current conflict, Nineveh and Salahaddin, on average contribute nearly a third of Iraq’s wheat production and about 38 percent of its barley.

As the availability of staple food commodities like wheat will be affected, food access for many market-dependent households, poor families and the displaced will likely deteriorate further. And although full information on food prices is not yet available, costs of staple commodities are likely to rise.

For instance, reports indicate that in Nineveh and Salahaddin governorates, grain reserves are being depleted and levels of available food via the public distribution system are fast deteriorating. The system is the main source of food for the poorest Iraqis, providing them with subsidized rice, wheat flour, oil, sugar and baby milk formula.

“If the conflict continues, basic food commodities and other essential items will be increasingly unavailable to the most vulnerable, despite government subsidies,” said FAO Representative in Iraq, Fadel El Zubi. “The conflict and displacement has also coincided with the peak of summer heat and the holy month of Ramadan, when household expenditures on food and other essential items are normally higher.”

In addition to the governorates, which are the epicentre of the ongoing conflict and civil insecurity, the northern Kurdish region of Iraq is also under pressure, since it is now hosting a large share of people who have fled their homes in addition to some 225 000 Syrian refugees.

According to the FAO report, animal diseases are already a threat to livestock in Iraq and a danger to public health, particularly for refugees and people who have been displaced.

FAO is calling for $12.7 million to provide urgent support to farming families, particularly in crop and livestock production, to mitigate the damage to food, income and employment sources. The Organization needs to secure funds by July/August to provide crisis-affected farmers with seeds and fertilizers in time for the October/November cereal planting season where open field cultivation is possible.

FAO also gives high priority to helping vulnerable families with more immediate means of feeding themselves and generating income through backyard vegetable and poultry production as well as cash-for-work activities in partnership with the World Food Programme.

Another crucial focus is the provision of animal feed and veterinary services to help safeguard animal heath and livestock production in the country, which includes 8 million sheep, over 2.5 million cattle, 1.5 million goats and 38 million chickens.