Would you own a pet that could kill you with the swipe of a paw? A lot of people do.

Reports suggest there are more captive tigers in the U.S. — including as pets and at rinky-dink animal attractions — than are left in the wild. Many are features at roadside zoos, such as the one depicted in the hit Netflix series Tiger King.

Filmed over the course of five years, the documentary series takes viewers into the world of Joe Exotic — alias of Joseph Maldonado-Passage — a self-declared redneck and aspiring country singer who owned a cub-petting, tiger-breeding zoo in Oklahoma.

At the heart of the series is Exotic’s ongoing feud with animal rights advocate Carole Baskin. Last year, Exotic was convicted of several wildlife violations and for hiring someone to murder Baskin. Heavy on the soap opera melodramatics, the series largely glosses over the conservation issues tigers face.

Although owning a pet tiger may sound thrilling, experts warn that caring for these heavyweight apex predators is far more challenging, and dangerous, than is portrayed in media. For decades, wildlife conservationists and activists have worked to curtail private big cat ownership in the U.S. — a phenomenon they say is at odds with conservation efforts, and ultimately only adds to the captive tiger surplus in America. 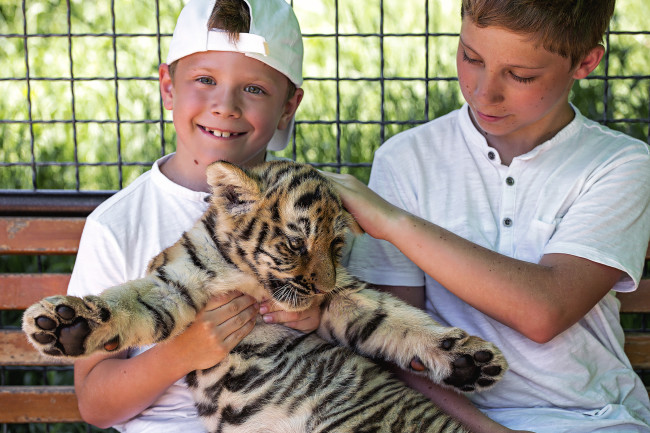 It’s estimated there are as many as 10,000 captive tigers in the U.S. — a number far greater than the roughly 4,000 believed to remain in the wild. The majority of tigers in America — around 95 percent — are not living in professional zoos that are members of the Association of Zoos and Aquariums (AZA), an accreditation organization that requires facilities to follow animal card standards.

Instead, most are in private hands that may, or may not be, subject to regulation. In many places, owners can legally keep dangerous exotic animals on their properties without reporting them to local officials or neighbors.

Prior to Tiger King, the public got glimpses of the strange reality of big cat and exotic animal collecting from news headlines. For instance, reporters in Houston last year wrote about a handful of people who went into an abandoned home to smoke marijuana — and came across a caged tiger.

Catastrophic incidents tend to illustrate the inherent safety risk that private ownership can pose to the animals and the public. In 2011, an Ohio man set free dozens of exotic animals that he’d kept on his farm before committing suicide. Among the animals eventually killed by sheriff’s deputies were 18 tigers, 17 lions, eight bears, three mountain lions, two wolves and one baboon. In the aftermath, Ohio went from having some of the loosest laws on private exotic animal ownership to having some of the toughest.

In Alabama, Wisconsin, North Carolina and Nevada, there are no permits required to own exotic animals. Other states have permit requirements, while 28 have banned ownership of dangerous animals (like big cats or bears). There are no federal laws prohibiting or regulating private possession of exotic animals.

According to the Humane Society of the United States, captive big cat attacks are more likely to happen at unaccredited facilities. Accreditation by the AZA includes evaluation of a facility’s security, safety protocols and training.

Tim Wild, the curator of large mammals at Wisconsin’s Milwaukee County Zoo, says he’s seen tigers and lions in private hands and wouldn’t trust the containments they use.

Enclosures at unaccredited facilities may not be able to withstand a tiger’s strength, says Bill Zeigler, in an email to Discover. “Many times, private owners do not build enclosures that have the proper safety features required, such as double barriers, so if an animal escapes its enclosure there is a second barrier to prevent it from escaping the property,” says Zeigler, senior vice president of animal programs for the Chicago Zoological Society, which manages the Brookfield Zoo just west of Chicago.

Perhaps unsurprisingly, human error — such as not properly shutting or locking a door, Zeigler says — has been the most frequent cause of animal escapes. And, for the record, zookeepers only interact with animals with a protective barrier in place; they would never pet, hug or take a selfie with a tiger.

“Tigers are extremely strong, and once they get a hold of you, either with their claws or teeth, getting free can be extremely difficult — and, in most cases, not without trauma,” says Zeigler. “Depending on the type of barrier, we never place a hand, face or other body part near the barrier.” 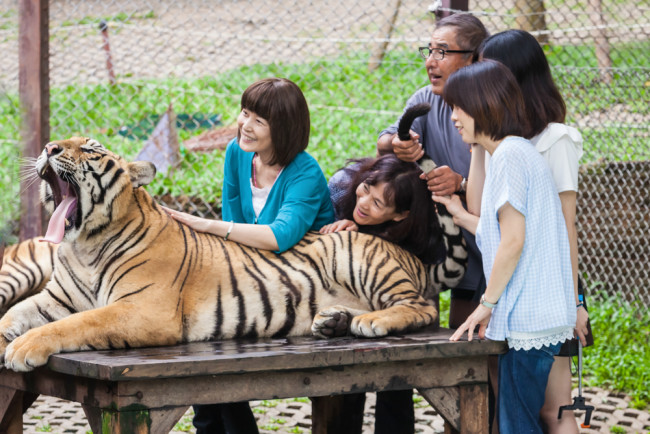 Zeigler and Wild say that some tigers seem to form bonds with zookeepers, especially if that person helped raise them from a cub. But it doesn’t take much for a tiger’s predatory instincts to come out.

“My personal experience with tigers? I wouldn’t mess with them, even the friendly ones,” Wild says. “I’ve seen tigers when they’re upset, when you’re trying to do something with them from a veterinary standpoint … they just become even bigger-looking.”

With shrinking numbers in the wild due to poaching and habitat loss, tigers are recognized as an endangered species by the World Wildlife Fund and other organizations.

Private big cat breeders contend they’re helping conserve tiger populations in case they go extinct in the wild. In reality, no captive tiger has ever been released into the wild — and likely never will.

Tigers born in captivity still have the instinct to kill, but they aren’t equipped to fend for themselves. Wild tiger moms spend a year teaching their cubs how to hunt, something that would be impossible to mimic in captivity. Big cats in captivity also don’t learn to fear or avoid humans. If these animals were set free, they may be attracted to people, which could prove fatal.

“Even with minimal interaction between keepers and tigers, there’s some imprinting, some comfort level around humans, and you just don’t want to let a tiger go with that level of familiarity,” Wild says.

Another problem with private tiger breeders is that they often produce hybrid tigers — or subspecies crosses — that are of little genetic value in conservation efforts.

Truly saving these big cats means preserving the six distinct subspecies of tiger that exist in the wild. Accredited zoos follow the species survival plan, which is a breeding program that pays close attention to the genetic makeup of the various subspecies. This work supports tigers in the wild by serving as a genetic reservoir, says Zeigler.

“A lot of tigers in private hands, we don’t really know what they are,” Wild says. “The record keeping isn’t there, there’s not a lot of genetic testing, and there are not a lot of family tree records out there.”

The hybrid tigers also may lack the traits needed to thrive across a wide range of habitats. The genetic makeup and evolutionary history of each subspecies is unique, which gives tigers characteristics and traits that help them adapt to their natural environments.

In other words, not all tigers are the same — a Sumatran tiger is genetically different from a Siberian tiger. So you can’t just drop off a random blend of tiger in the wild and assume it will survive.

What Big Cats in Captivity Need

Professionally caring for a tiger is not an easy task. For starters, tigers are obligate carnivores with big appetites. The average tiger in captivity eats 13 to 15 pounds of meat a day, but they can easily consume three to four times that amount.

“Feeding large cats can’t just be about providing plain meat or things like chicken — which, by themselves, without proper micronutrients, can cause things like rickets and other metabolic diseases,” says Zeigler.

Tigers also need opportunities to exercise, express their natural behaviors and interact with their environment. Accredited zoos have enrichment programs intended to physically and mentally stimulate tigers in captivity and add some unpredictability to their days.

“[Examples of] these things [might include] placement of food puzzles, where they have to actively search for food, various scents like perfumes or musks to check out, like they would when marking their own territory, objects they can manipulate like trees to claw, balls of different shapes and sizes to engage with,” Zeigler says.

Wild points out that just because a facility is unaccredited, that doesn’t mean that it’s a bad zoo, or that it’s not focusing on animal enrichment — there’s just no way to verify it.

Still Just a Cat in a Cage?

There’s growing public skepticism of animal captivity in general, along with newfound understanding that many animals are far more intelligent and more sentient than we’ve given them credit for. 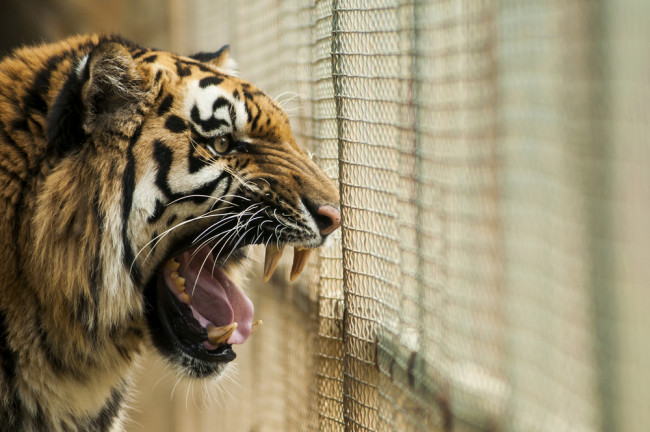 Researchers also have found that some animals are prone to experience stress in captivity. In 2003, scientists concluded that wide-roaming carnivores, like tigers, are not well suited to captivity. Some experts say the quality — or complexity of an animal’s living space — is more important than the quantity.

There’s also an emerging field of science called conservation physiology, which attempts to understand and address the effects of environmental stressors on animals. For instance, a zoo might try to keep tabs on an animal’s stress level by monitoring its hormones and adapting its lifestyle in response.

At the end of the day, proponents of responsible zoos say the animals generally live healthy lives and provide an opportunity to learn about animals, which can help their counterparts in the wild. The conservation value of exotic animals as personal pets or profit-driven breeding programs and petting zoos, however, is far less clear.

“Some of the reasons around the excitement of owning a large, dangerous animal is really being self-centered, and more about the individual than the cat itself,” Zeigler says. “However, there are some [people] who really care about tigers. To those people, I would say support zoos and other conservation organizations who have the ability to do more in the long run for tiger conservation.”