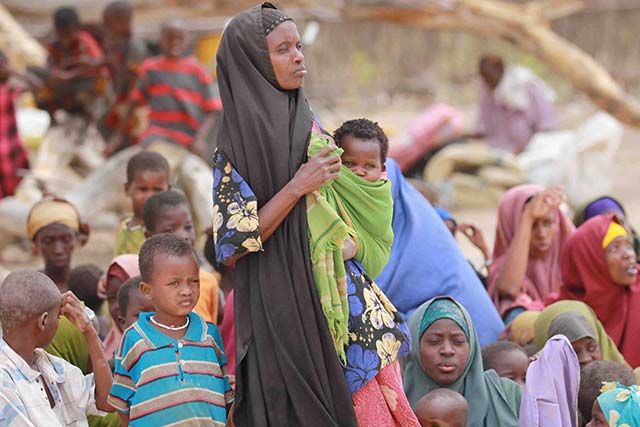 A combination of delayed Gu (April-June) rains, rising food prices and persistent insecurity in Somalia is likely to worsen the country’s food security situation in the coming months, experts have warned. Food security in the Horn of Africa nation is likely to deteriorate particularly in southern regions of Lower and Middle Shabelle Regions (major maize producing regions in Somalia), due to persistent insecurity and displacements, delayed current season rainfall, and their impacts on agricultural labor demand and staple food prices. Delayed and poorly distributed rains are also a major concern in the mainly pastoral northeastern part of Somalia.

As per the results of a joint assessment announced in January this year by the Food Security and Nutrition Analysis Unit for Somalia (FSNAU), a project managed by UN’s Food and Agriculture Organization (FAO), and the Famine Early Warning Systems Network (FEWS NET), an estimated 857,000 people remain in Crisis and Emergency (IPC Phases 3 and 4) requiring urgent humanitarian assistance through June 2014. Levels of acute malnutrition remain Critical (Global Acute Malnutrition rates exceeding 15%) among rural populations in many parts of South-Central Somalia and among Internally Displaced Persons (IDPs). Nutrition survey results carried out between November 2013 and January 2014 indicate that an estimated 203,000 children under the age of 5 are acutely malnourished. This figure includes 51,000 children that are severely malnourished and consequently face a higher risk of death.

According to FAO’s Water and Land Information Management Unit SWALIM, the Gu rainy season that starts in mid March in the Northwest parts of Somalia was delayed and kicked off in early and mid April, while most parts of the Northeast and Central are yet to receive the much awaited Gu rains. The first two dekads of April have been mostly devoid of rain across the Northeast, while the Northwest has fared better, although still widely below normal. This has led to early depletion of fresh water sources for human and animal consumption. The two major rivers that support irrigated agriculture, the Juba and Shabelle, are currently below their normal levels for this time of the year and one meter lower compared to the levels of last year.

Early Gu planting started in most parts of the South as from March 2014, although the intensity of cultivation has been relatively low in conflict-affected areas of Lower Shabelle and Hiran regions. Poor rainfall in some areas in April may force farmers to replant their crop in May if the rainfall situation improves. Therefore, Gu harvest prospects will largely depend on rainfall amounts and distribution in May/June. Poor households in most agricultural livelihood zones of the country have already exhausted cereal stocks from the recent 2013/14 Deyr below average harvest and currently rely mostly on market purchases of cereals until the next Gu harvest expected from July to August 2014.

“The month of May remains critical during which, if rains fail, combined with sustained insecurity, we might see new levels of crisis unfold especially in southern parts of Somalia and the mainly pastoral northeast,” said Daniel Molla, the Chief Technical Advisor of FSANU.

Data from health facilities for the first quarter of 2014 shows increase in acute malnutrition in some livelihood zones (Northwest agro pastoral, Hawd, as well as Addun livelihood zones). In these areas, access to potable water for human consumption and water for livestock has deteriorated. Further delays in seasonal Gu rains is likely to lead to increased malnutrition in these regions by reducing household access to milk as livestock migrate to distant regions in search of pasture and water. Increasing trends of acute malnutrition were also reported by health facilities in Juba pastorals and Agropastorals in Lower Shabelle.

Recent displacements in the lead up to and during the recent military offensive against insurgents and subsequent movement and trade restrictions by insurgents have hampered agricultural activities in parts of the South (Lower Shabelle, Bulo-Burti, Jalalaqsi, Hudur,Wajid and Buurdhubo) and caused disruptions in trade and market activities in South-Central. Trade embargo imposed by insurgents in government-controlled areas (Hudur, Wajid, Bulo-Burti, Qoryoley, Elder and Elbuur districts) resulted in increased prices of essential food commodities. For instance, a the price of red sorghum increased by 25 percent, while the prices of other essential imported food (rice, wheat flour, sugar, vegetable oil) increased in the range of 40-50 percent during the month in Hudur market of Bakool region.

If movement and trade restrictions persist into May and June, this could adversely affect crop production prospects, agriculture related employment opportunities, food prices and access to humanitarian assistance, thereby further exacerbating the already poor food security and nutrition situation in most the above areas. Improved precipitation in May and June will also be critical in the northeast where access to water for both human and livestock is currently very poor.