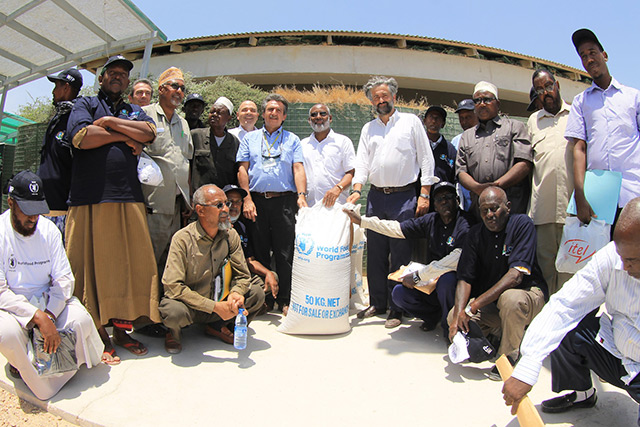 For the first time, Somali farmers are turning themselves into suppliers of high-quality food assistance for their fellow Somali people. A new initiative backed by the European Union, the government of Austria and two United Nations food security agencies has helped Somali farmers achieve this major agricultural breakthrough in a region of the country that was gripped by famine less than three years ago.

With the support of the EU and the UN Food and Agriculture Organization (FAO), small-scale farmers have boosted the yields and quality of their maize grains, allowing them to sell 200 metric tons of high-quality maize to the UN’s World Food Programme (WFP), which purchased the grain with funds supplied by Austria.

Agricultural communities – especially in south-central Somalia, the country’s grain basket – have, over the last two decades, been severely affected by conflict and recurrent drought, which has resulted in the widespread failure of crops and poor yields. The EU, Austria, FAO and WFP are working with local farmers to change that.

“The EU strongly supports this pilot initiative to empower the Somali farmers and their markets,” said Michele Cervone d’Urso, the EU Ambassador to Somalia. “By enabling them to provide food aid for Somalia, we support the entire Somali economy.”

“This initiative shows that Somali farmers are not helpless. With minimal assistance including agricultural inputs, tools, technical skills in storage, grading and marketing, they can make a great difference,” said Luca Alinovi, FAO’s outgoing representative for Somalia.

Red Cross Red Crescent: We need new extraordinary steps to increase access to COVID-19 vaccines and we need them now