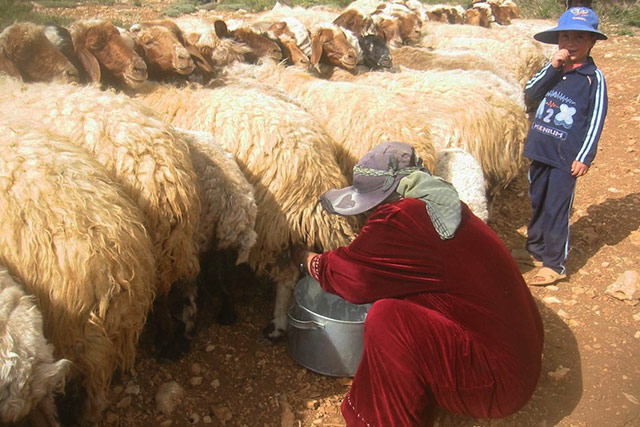 Animal health services collapsed in Syria in June 2012. Livestock keepers fleeing the conflict in Syria are entering Lebanon with large numbers of unvaccinated sheep, goats and dairy cattle. Yusef is a dairy farmer in Akkar who owns 30 cows. After contracting lumpy skin disease, two of his cows died, while another six stopped producing milk. In the best case scenario they will start producing milk again only in a year’s time.

Yusef is lucky. He still owns 22 cows to sustain his family. For smallholder animal farmers, such diseases can represent the end of their livelihoods.

Livestock farming communities in the areas bordering Syria have not been fully covered by the vaccination campaign. According to an FAO survey undertaken in 2012 in Bekâa, North Lebanon and Akkar, 84 percent of farmers reported Foot-and-Mouth Disease (FMD) and Peste des Petits Ruminants (PPR) as the main livestock disease problems.

Altogether, 58 000 cattle, 277 000 sheep and 424 000 goats will be vaccinated against the major transboundary animal diseases in Lebanon, namely FMD, PPR and lumpy skin disease.

Lebanese livestock keeping communities, Lebanese returnees who have crossed into Lebanon from Syria, Syrian refugees and veterinary services will benefit from the project that  is expected to help preserve assets of the poor by reducing the threat of Transboundary Animal Diseases and decreasing the number of animals dying, malnourished and sold at reduced prices.