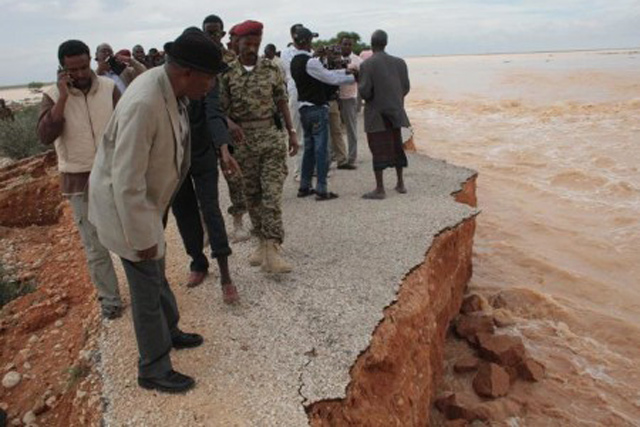 Shortly after the devastating cyclone hit parts of northern Somalia, the extent of its impact is beginning to emerge with about 100 people feared dead and tens of thousands of livestock wiped out according to the Puntland authorities.

According to data collected by weather experts at the UN’s Food and Agriculture Organization (FAO), the cyclone, characterized by unusually heavy storms, is currently dissipating after heavily inundating the coastal town of Eyl at 139 mm of rainfall, followed by Garowe (117mm) and Dangoroyo (100mm). Rainfall data shows the storm diminished over Somaliland.

“Given that Puntland is a semi arid region, it rarely rains but when it does, to an extent we have seen in the last 48 hours, the impact is devastating,” said Hussein Gadain, the Chief Technical Advisor for FAO’s Somalia Water and Land Information Management unit (SWALIM).

According to a statement by the President of Puntland, the cyclone is feared to have killed over 100 people and destroyed up to 100,000 livestock. At least 14 fishing boats along with their crews are said to be missing at sea in the cyclone that also damaged a main bridge connecting the rest of Puntland with the the commercial coastal city of Bossaso which is important for livestock exports. FAO cannot immediately and independently confirm these figures.

About 65 percent of Somalia’s population depends on livestock, a sector that has seen tremendous growth since Gulf States lifted a 9-year ban on Somali livestock exports half of which is exported through the Somali port of Bosasso, located in Puntland. According to the Puntland government, the cyclone has also led to the loss of tens of thousands of livestock, which could impact the sectors growth.

“Knowing that livestock and fisheries are key livelihood activities in the affected regions, we anticipate the storm to heavily hurt coastal communities. This is why FAO, where possible will do its best to supports the affected sectors and families,” said Rudi Van Aaken, the acting head of FAO in Somalia.

Nevertheless, the extent of damage is considerable. More information and data are being received from both government and non-government sources. A joint rapid assessment mission will be deployed soon to assess the impact and devise a response to the crisis. Mohamed Salih, head of the Garowe based FAO Sub Office for Puntland is also part of a government led task force working on daily basis to monitor the situation and planning the responses.

According to SWALIM’s forecast data, the cyclone subsided though heavy rains are likely to be experienced in the land inwards.

Over the last three years, Somalia has been on a slow but promising path of recover following 2011’s famine and effects of a long running conflict. Recent floods in Johar and the current cyclone in Puntland show, however that the situation remains fragile.