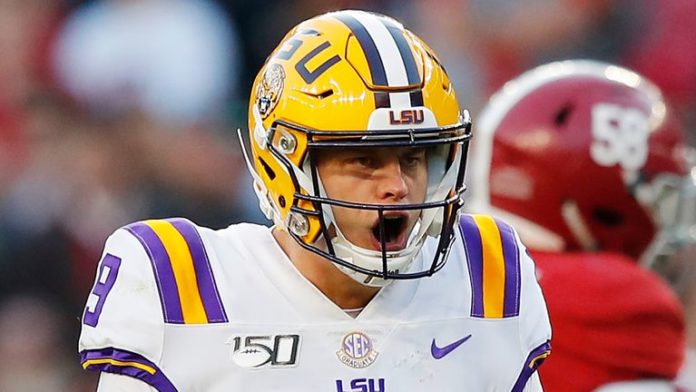 Peyton Manning has warned likely No 1 pick Joe Burrow to expect a rough ride in his rookie NFL season.

Louisiana State University quarterback Burrow is almost universally expected to be the announced when the Cincinnati Bengals make the first pick of the league’s first virtual draft, which will get underway on Thursday.

Burrow led LSU to a national championship last season, passing for 5,600 yards and a record 60 touchdowns, on his way to winning the Heisman Trophy as college football’s best player.

But he will be joining a Bengals squad which managed to win only two games last season, most likely finding himself in a similar situation to future Hall of Fame quarterback Manning when he was the No 1 pick of the Indianapolis Colts at the 1998 draft.

Manning went 3-13 in his first professional season but things would soon turn around for him and he went on to win two Super Bowls and secure 14 selections to the Pro Bowl in his 18-season career.

“He called me about some of the things that I tried to do as a rookie that maybe he can apply to his NFL career,” Manning said.

“I learned some things in the fourth quarter of those [1998] blowouts about what it took to be an NFL quarterback and the next year we went from 3-13 to 13-3.

“That wouldn’t have happened if I hadn’t have hung in there and learned the ropes as a rookie, even though we took some bumps and bruises.

“So that’s what I tried to encourage Joe and all the other rookie quarterbacks, that your rookie year is not going to be the same as your senior year in college. But if you learn how fast the defensive backs are, how soon you have to get rid of the ball, understand defenses, you can become a better player and really get it going the year or two after that.”