Home Sport Leclerc holds off Albon for another win 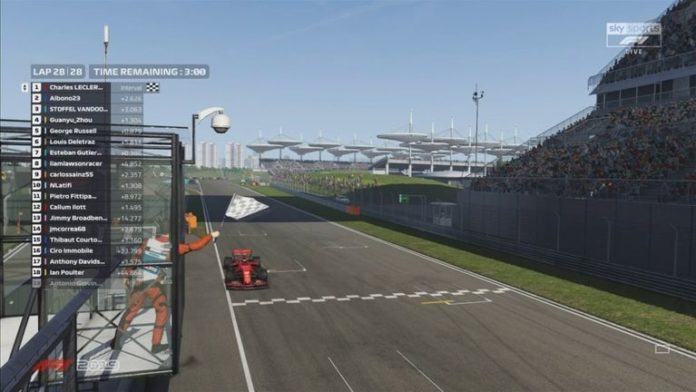 Recap the best moments from another entertaining online F1 race

Charles Leclerc once again proved his online racing nous as he made it back-to-back Virtual GP victories on Sunday night – albeit after an epic race-long battle with F1 rival Alex Albon around the Shanghai circuit.

Leclerc and Albon, mainstays at the front of the grid in F1 for Ferrari and Red Bull respectively, were the class acts in a Virtual Chinese GP which included sporting stars such as Thibaut Courtois and Ian Poulter.

I’m actually enjoying very much playing, and streaming. And I enjoy it even more when I win. But the post race celebrations are somehow feeling a bit different. Switching off the computer and go cook white pasta is a bit less glamour than spraying champagne on the podium

But while Albon pushed Leclerc hard throughout F1’s third official Esports race, even undercutting him in the pits, it was the Monegasque who came out on top after a risky overtake into Turn One, nudging Max Verstappen’s team-mate aside for another race win.

“I am disappointed, I’m not going to lie,” said Albon, who was already looking ahead to F1’s next online event. “Back to the drawing board.”

Has the race started yet, or have I missed it?

Not everyday you see a goalkeeper with an assist 😉The ultimate team player @thibautcourtois 🤣👏 #VirtualGP pic.twitter.com/5MPcqfiVIZ

… before going for a spin while chatting on-air!

How the F1 drivers, and footballers, fared

Leclerc and Albon were two of seven F1 drivers in action.

George Russell also impressed and, after a controversial qualifying penalty which cost him a front-row start, finished fourth in the Williams.

Behind him, real-life team-mate Nicholas Latifi was ninth, a place ahead of Carlos Sainz who was making his Esports F1 debut for McLaren and a had a huge spin at the start, while Alfa Romeo’s Antonio Giovinazzi didn’t even finish the race.

Although that was more than Lando Norris accomplished, with the young British driver facing more technical difficulties and failing to even take part.

Guanyu Zhou, winner of the first of three virtual F1 races in the absence of the 2020 season, completed the podium for Renault after some wheel-to-wheel battles with Stoffel Vandoorne, who was handed a post-race penalty and finished fifth.

Both beat Sky F1’s Anthony Davidson, who would have propped up the timesheets if not for Poulter.

Google backtracks on office returns and will allow employees to work...