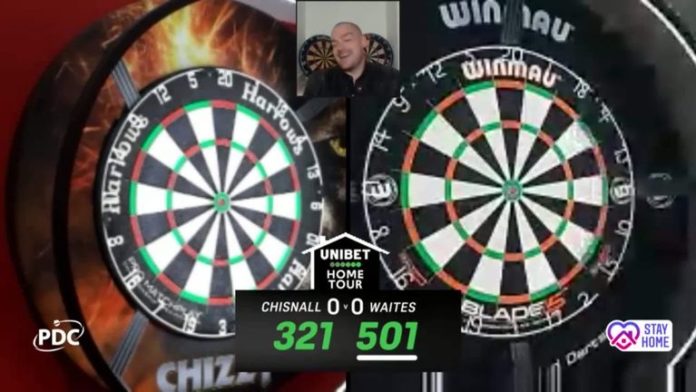 Dave Chisnall became the first big name to prevail in the PDC’s Home Tour, winning all three of his matches to top Group Three on Sunday.

The world No 11, the highest-ranked player in the group, recorded three successive victories, beating Jonathan Worlsley and Jan Dekker after an opening match win over Scott Waites that was to prove decisive.

Two-time BDO world champion Waites recovered from his 5-2 defeat to Chisnall to record heavy wins over Dekker and Worsley, but Chizzy needed just two legs in the final match of the evening and despite falling a leg behind early he got the two he needed on his way to another win.

After Luke Woodhouse’s kitchen nine-darter on Saturday night, Sunday’s star turn came from Chizzy’s man cabin in Morecambe – with him at pains to put out it was not a man cave and was better than his rival from Chepstow as Worsley was quick to pronounce his set-up as the best in world darts.

It wasn’t to be for Holland’s Dekker who had threatened a stirring fightback in his opening match, but having fought back to level at 4-4 from 4-1 down he lost in a last-leg shoot-out to Worsley who went on to lose heavily to Waites.

The one-sided contests continued as Waites and Chisnall chalked up big wins meaning it would all come down to the final match of the evening. Having got the legs he needed, Chizzy cruised to a win despite being far from his best.

It’s another win for Chizzy on the #PDCHomeTour as he beats Dekker 5-0! ⚡

For live coverage download the Sky Sports app below! 📲⬇

The man from St Helens, a five-time TV tournament runner-up, was at ease throughout from the comfort of his own home and in a month’s time, when the remaining 29 nights have been played out he will reconvene for the latter stages.

James Wade, Luke Humphries and Devon Petersen are among the latest names confirmed for the tournament which continues on Monday night with history-making Lisa Ashton the star turn in a group that includes Mickey Mansell, Geert Nentjes and Ross Smith.

After world champion and world No 2 Peter Wright was sent packing on opening night, world No 3 Gerwyn Price followed suit on Saturday but Chisnall avoided any such scares with a comprehensive night’s work to join Luke Woodhouse and Jamie Lewis in the second phase.